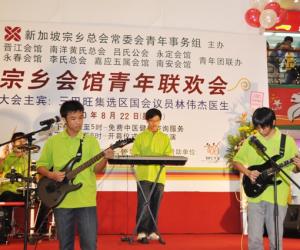 Three qualified Chinese medicine practitioners from the Singapore Lam Ann Association were on hand to provide free health check-ups for the public from 3pm onwards while the other 8 clan associations set up stalls in the People’s Park Complex to display profiles, activities, and information on their respective clan associations in hope to attract more youths in joining them.

The event kicked off at 4pm with the arrival of Guest of Honour, Dr. Lim Wee Kiak, Member of Parliament for Sembawang Group Representation Constituency. In his opening speech, Dr. Lim expressed that, “Singapore places emphasis on nurturing bilingual individuals and by participating and organising clan activities, it does not only strengthen the Chinese language skills of youth but also enable them to learn on how to communicate with their elders and co-operate with their peers.” He felt heartened that some clans have moved along with times by setting up websites or even Facebook. With that said, he looks forward to seeing the continuous efforts of youth in promoting Chinese culture and their contributions to the community.

The preparatory group from each clan associations had also arrived earlier to put together a wishing tree. Despite the size and simplicity of the wishing tree, it represented the creativity and unity of the youths. Guests were also invited to write down their good wishes for the country and hang them on the wishing tree.

Before the performance, the emcee gave a brief introduction to each of the clan associations. Quizzes and interactive games were also conducted to raise public awareness of the various clan associations in Singapore through asking relevant questions which received an enthusiastic response from the public.

The list of programmes included lion dance, martial arts, choir, and dance performances, which were organised and presented by the youths of the clan associations. In particular, the band performance brought by Chin Kang Huay Kuan Youth Group received an overwhelming response and heated up the atmosphere. The event concluded with a group sing-along to the song “Friends (朋友)”.

Following the event at the People’s Park Complex, a buffet reception was also organised at the Huang Clan Singapore Association from 7pm to 9.30pm that evening for the youth group members from the various clan associations to get together and bond with one another.

Mr Charlie Lee Wee Chung, Chairman of the Organising Committee and SFCCA Youth Committee, mentioned that the event was a test for the youths. From not knowing each other to completing the event in just a few months, they pulled through with a strong determination and concerted effort.