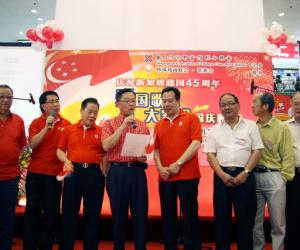 At 7pm, Minister for Manpower Gan Kim Yong, accompanied by SFCCA Secretary-General Lim Fang Hua, arrived at the event venue. As the national anthem started playing, audiences held their fists near to their chests and recited the Singapore pledge together. Shortly after, Singapore Ann Kway Association presented “Wishing You Singapore” (祝福你啊新加坡), a lively yet heartwarming song.

Many other patriotic songs sung during the sing-along session include “Moonlight Boat Ride” (月夜泛舟), “Beautiful Singapore” (美丽的新加坡), “The Awakening” (雾锁南洋), “Song of the Night Flight” (夜航之歌) sang later that evening celebrates the beauty of Singapore. Familiar evergreen songs such as  “Voices from the Heart” (小人物的心声), “Friends” (朋友), “Tomorrow Will Be Better” (明天会更好), “In the Spring” (春天里) evoked memories and audiences were able to sing along with the melody which created a lively and joyful atmosphere.

Minister Gan Kim Yong and various council members were also invited on stage to perform the song “Believe in me, Singapore” (相信我吧，新加坡) which received a huge round of applause from the crowd. The event ended off at 9 pm with a heartwarming song titled “Hand in Hand, Heart to Heart” (手拉手，心连心).