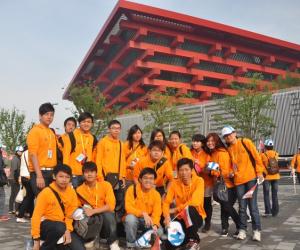 Upon receiving an invitation from the Embassy of the People’s Republic of China in Singapore, SFCCA formed a group with 15 youths from its member associations and new immigrant groups to attend the “Shanghai World Expo” Summer Camp led by SFCCA secretariat staff Liu Hong Liang in Shanghai from 3rd to 12th May 2010. Organised by the Chinese Language and Culture Education Foundation of China and Shanghai Overseas Exchange Association, the camp aims to not only enhance Singaporean youths’ understanding of China and the World Expo but also to promote communication and exchange between the youths from all over the world.

The camp had a total of 350 participating youths, including students from Malaysia, Thailand, and the Philippines, who were accommodated in different schools and hosted to a range of activities. The Singapore team was accommodated at Shanghai Caoyang Middle School with 60 other Chinese youths from Indonesia.

Start of the Summer Camp

The 9-day programme included a visit to Shanghai, lectures by renowned artists, a tour of Suzhou and Hangzhou, and a trip to the Shanghai World Expo.

The opening ceremony kicked off on the morning of 4th May at Caoyang Middle School, with a speech given by the principal of the school and leaders from the Shanghai Overseas Exchange Association. After the ceremony, the group boarded a bus for a tour in Shanghai. Apart from standing on the 100-story tall Shanghai World Financial Centre for a picturesque bird’s eye view of the city, the afternoon was also spent exploring the famous Nanjing Street. Later that evening, the group also boarded a “dragon boat” for the beautiful night scenery along the Huangpu River.

Four lectures were arranged by the organisers on 5th and 6th May respectively where experienced secondary school principals and university professors were invited as lecturers to cover topics on Chinese culture, history, architectures and also the World Expo. In the context of the Chinese culture, the lecturer first introduced pictograms for the campers to understand the wonders of Chinese characters and also the taboo of discourse in the culture. The lecturer then briefly described the civilisation and background of each dynasty in China’s history. From the architecture lecture, the campers also learnt about the richness of China’s architectural art in the form of Siheyuan, Yaodong (house cave), and Hakka Tulou, which have deep ethnic characteristics. The World Expo is “an exchange for the world, a change for China”, the significance of success on Shanghai World Expo to both Shanghai and China as a whole, and the preparations Shanghai had made for it as well as the meaning behind the theme of “Better City, Better Life” was also explained during the lecture.

The participants spent the next three days in the beautiful water towns of Suzhou and Hangzhou, where they visited the Six Harmonies Pagoda and Lingyin Temple, and enjoyed a boat ride to the West Lake. Besides, they also visited the Tiger Hill and Liuyuan Gardens where the campers were all enchanted by the stunning scenery.

In addition to the 350 participants at the summer camp, 2,010 overseas Chinese representatives from all over the world also attended the launch ceremony of the “Overseas Chinese Return Home to See Expo” event on 10th May, which symbolises the year of the event. Li Haifeng, head of the Overseas Chinese Affairs Office of The State Council, mentioned in her speech that she hopes to see overseas Chinese actively playing their role as “civil ambassadors” and to deliver the long history of Chinese culture, the modest image of China and the profound spirit of the Expo to the people of their home countries which contributes to a friendly exchange between China and abroad as well as to the harmonious development of the world. Shanghai Mayor Han Zheng also commented that the Shanghai World Expo is an event for people from all countries to interact with each other and for overseas Chinese to reunite back home. The event will enhance the exchange, contact, and cooperation between overseas Chinese and the Chinese community.

The China Pavilion features the shape of a crown with elements of Chinese architecture and culture, expressing the conceptual theme of the “Oriental Crown”. Following the launch ceremony, the participants had a tour around the China Pavilion, where they were able to watch a film on Shanghai’s progressive development into a modern and prosperous city and the original painting of the masterpiece “Along the River During the Qingming Festival” (清明上河图), where the characters were recreated in an animated form. Besides, via a small train that runs through the pavilion, they were also able to see ancient and modern sculptures of bridges and “Dougong“, which shows the wisdom of Chinese architecture. The pavilion also showcases China’s efforts in the field of recycling and renewable energy.

Over the two-day trip to the World Expo, the participants visited many different countries’ pavilions, including Japan, Sweden, Greece, Spain, Finland, Nederland, Asian countries, and Africa. They also visited the Pavilion of Coca-Cola, State Grid Corporation of China, and Urban Footprint in Pudong. The participants generally felt that the trip was a pleasant one with excellent accommodation, good food, and an eye-opening experience at the World Expo. However, they felt that it would have been better if the programme was more compact and more time was given to them to tour around the Expo.