Adjustment of Weightage for PSLE 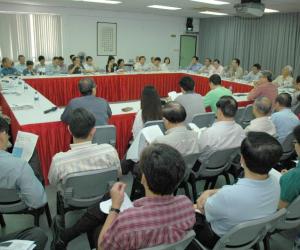 In a recent press interview on 21st April 2010, Education Minister Ng Eng Hen mentioned, “The Ministry of Education will explore the possibility of adjusting the weightage of Mother Tongue in the Primary School Leaving Examination (PSLE).” This announcement has shocked the Chinese community, and people from all walks of life have expressed their opinions and reacted strongly to this issue.

As one of the leading bodies in the Chinese community, SFCCA is responsible for upholding the Mother Tongue language and its future, which affects the preservation and development of the culture in the community. Given this, SFCCA held an emergency meeting on 1st May 2010 where they invited representatives from its member associations to discuss and gather their views on this topic. 74 representatives from 33 clan associations attended the meeting.

During the meeting, participants discussed areas such as the negative impacts of reducing the weightage of Mother Tongue scores, the economic benefits of bilingual education, the responsibility of the Ministry of Education (MOE), and the building of national confidence. SFCCA and all participants at the meeting agreed that the Chinese language proficiency level of our Chinese students has been deteriorating and if MOE further adjusts the weightage of Mother Tongue, the long-established foundation of bilingual education would be affected and our competitive edge towards the world would also be weakened.

SFCCA collated the views expressed at the meeting and submitted them to Minister Ng Eng Hen on 6th May 2010, with a copy sent to Prime Minister Lee Hsien Loong. In the letter, President Wee Cho Yaw conveyed on behalf of all members the importance of which the Chinese community attaches to this matter and emphasised that:

“Language is a tool of life, but even more the soul of a nation. If a community gives up on its mother tongue, it is also giving up its soul; once the cultural heritage of a community is taken away, it will affect a generation or even generations of people to feel detached and indifferent to their own culture, affecting the patriotic sentiment.”

Upon hearing the response from the Chinese community, Prime Minister Lee Hsien Loong and Minister Ng Eng Hen held a press conference on 11th May 2010 to explain the government’s view and position on the Mother Tongue education. Prime Minister Lee said that the government has no intention of lowering the status of the Mother Tongue in society or reducing the weightage of it in PSLE. MOE has appointed the Director-General of Education to lead a working group that began to explore ways to improve the teaching of the mother tongue language at the end of last year. The initial idea is to instill the broad principles of teaching in line with students’ ability and learning to apply into the form of textbooks and teaching materials so that students would feel that Mother Tongue is not just an examination subject, but is closely related to their lives, motivating them to learn and use more frequently.

Besides, SFCCA has received a letter from the Education Minister on 19th May 2010, in which he expressed his gratitude to SFCCA and its member associations for their feedback, and repeatedly emphasised that MOE will not reduce the weightage of Mother Tongue. With that said, he also mentioned that more Chinese language teachers will be hired and attractive programmes would also be planned to enhance students’ interest in learning Chinese.