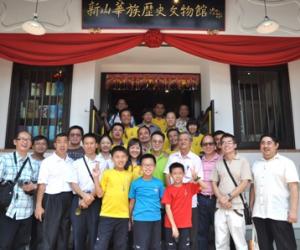 The Johor Bahru Parade of Deities is a grand annual occasion for the people in Johor Bahru. Following last year’s event, SFCCA Youth Committee was once again invited by the Persekutuan Tiong Hua Johor Bahru to join the Parade of Deities. On the morning of 6th March 2010 (21st day of the first lunar month), SFCCA Youth Committee Chairman Mr Charlie Lee Wee Chung led a 20-member group to participate in the parade to experience the excitement of the crowd and learn more about the folk culture.

Led by Wei Mei Ling, Chairman of Tiong Hua Johor Baru Youth Group, SFCCA Youth Group first visited the Johor Bahru Chinese Heritage Museum which was officially established last October. The four-storey museum, located in an old shophouse on Jalan Tan Hiok Nee in Johor Bahru, features an exhibition on the first floor that documents the events that have influenced the development of the Johor Bahru Chinese community over the past 160 years (1884 to 2004), enabling visitors to revisit the past and reminisce the paths their ancestors took. On the top of a board, there is an eye-catching motto of “Preserving the history of our ancestors for the future of our descendants”, which reminds the Chinese descendants to never forget the contributions and hard work of their ancestors.

The second floor, themed “In Search of Johor Bahru Stories”, exhibits the various occupations and businesses from rubber harvesting to pawnbroking operated by the Johor Bahru Chinese community. On the third floor, the histories of Ngee Ann Kongsi and the “Johor Five Clans” (made up of five locality clans), the encounters of the Chinese during World War II, and the connection between the Johor Bahru Old Chinese Temple and Foon Yew High School are recorded. On the fourth floor, the wedding rituals of different ethnic groups are introduced with a display of wedding decorations and exquisite furnishing of the five different dialect groups, which seemed simple yet significant.

After the visit, SFCCA Youth Committee Chairman Charlie Lee Wee Chung mentioned that he found it memorable that the exhibition panels on the first floor showcases the development of Johor Bahru from a village to what it is today. He believes that this is a show of respect for the pioneers of Johor Bahru and an act of “remembering one’s roots” so that future generations can remember how their ancestors have built and developed the Johor Bahru to it is today. It was because they never gave up on creating a better life for their descendants that people today can enjoy the harvest of their development. 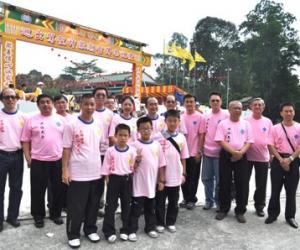 Group photo in front of the temple

A Folkloric Event for All

At around 5 pm, the representative group arrived at the temple where the five clans’ gods are housed to prepare for the Parade of Deities at 7 pm as well as to experience the strong atmosphere of the event. As the hours went by, the crowd who came to have incense burned grew larger and more people gathered at the temple to pray for blessings. Different performing groups such as dragon dancers and lion dancers also came to the temple to present short performances after being introduced by the host.

At around 7 pm, the temple was packed with people, and the deities were carried out of the temple one by one for the start of the 8-mile long journey that will take about 7 hours to complete. Following the procession, the representative group went through the main streets of the old city of Johor Bahru, where people of all ages, regardless of race could be seen spectating along the way. The floats and performing groups would stop for a moment to perform and the sedan chair of the deities would be shaken vigorously from time to time, with people shouting “Huat ah, huat ah“. Although the representative group did not complete the whole journey, but they witnessed the passion of people from Johor Bahru and the charm of this traditional event.

The members of the representative group agreed that in addition to their annual visit to Johor Bahru to participate in the grand event, they should also have more frequent contact and exchange with the clan associations in Johor Bahru, exploring more cultural tour activities for the younger generation to participate in.