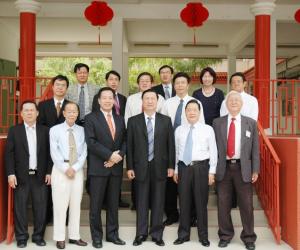 Apart from taking them on a tour to the Heritage Resource Centre, the group also watched a video on the origin, development, and future prospects of SFCCA over the past 20 years. In summary, Mr Lin Fang Hua said that the role of SFCCA has changed over the years. In order to keep pace with time, SFCCA has pooled its strengths to promote the Chinese language and tradition.

Director Feng Zuhua, who took office two months ago, praised the contributions of SFCCA to the society and said that apart from getting to know and understand more about overseas Chinese, he also took this opportunity to introduce the recent development and investment opportunities in Guangxi, and encourage them to “return home” to take a look.

He mentioned that the Chinese Government attaches great importance to the Chinese diaspora and has been strengthening its organisational structure, enhancing the transmission of information channels and actively promoting Chinese language education. For example, the Foreign Affairs Office of Guangxi Zhuang Autonomous Region would organise the “Searching Roots” summer or winter camp yearly to bring the new generation of overseas Chinese to China to visit their ancestral homeland. Director Feng Zuhua also welcomed SFCCA to visit Guangxi someday.