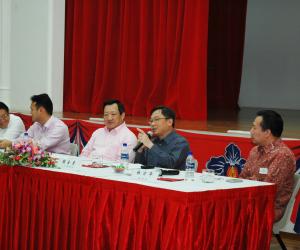 SFCCA’s Secretary-General Lin Fang Hua believes that such dialogues are very important, and that communication through such channels will lead to a deeper and more comprehensive understanding between the government and the citizens.

Minister Gan Kim Yong said that members from CDAC have had many exchanges with various clan associations over the past 2 years and have received many valuable opinions. Hence, for this dialogue session, representatives from clan associations were invited again to gather at SFCCA to express their views on matters.

During the dialogue session, the participants discussed issues such as difficulties in hiring foreign workers, succession of clan, integration of new immigrants as well as cultural and language issues.

The first question was posed by SFCCA Secretary-General Lin Fang Hua, who said that while Singapore’s economy has started to stabilise, the quota for foreign workers in some of the enterprises is still very limited. Minister Gan expressed that the Government is raising the threshold of eligibility to bring in skilled workers of higher calibre so that Singapore can remain competitive.

According to Loo Ming Hui, Chairman of Loo Clan Association’s Youth Committee, the youths may face setbacks and difficulties in starting up their own businesses, and clan associations can help them establish networks and personal connections. He has also set up an account on the famous social networking site Facebook and enhanced the clan association website’s content, so that more youths can understand the activities and nature of their association. The Youth Day event recently organised by the Loo Clan Association welcomed many new faces, and therefore he thinks that such an approach is effective.

Minister Gan commended Loo Clan Association;s approach, but also felt that the mission of the association should be on promoting Chinese Culture and fostering moral values, and this should be preserved.

Chng Teng Siong from Chin Kang Huay Kuan mentioned that the clan association has been cooperating with the government’s policy to actively promote racial harmony and the integration of new immigrants. He hoped that the government would provide more information on how to apply for the Community Integration Fund to fundthe clan association’s activities. Minister Gan responded to Chng’s query, saying that Mr Koh from the People’s Association could be contacted, whilst Lin Fang Hua, Secretary-General of SFCCA, also pointed out that the information is available on SFCCA’s website (www.sfcca.sg) and in SFCCA’s newsletters.

On the issue of cultivating a better command of the Chinese language among local youths, MP Ang Mong Seng hoped that SFCCA could organise courses or enrichment classes to strengthen their mother tongue so that students are provided assistance in learning through various channels such as families, schools and community organisations.

The topic of integration of new immigrants was one of the main areas of discussion during the dialogue session. Jiang Huijun, Secretary-General of Hua Yuan Association, said that most of the young Chinese new immigrants live within their own social circles and have no communication or contact with the youths in Singapore. They are also not interested in the local culture or customs such as getai during the Hungry Ghost Festival, which is something to be concerned about. In response, Minister Gan said that most of the opportunities for youths to interact are in schools, and he would discuss with the People’s Association on promoting friendly exchanges between local youth and new immigrants.

MP Ang Mong Seng believes that if one keeps treating his or her status as a new immigrant and not as a citizen, he or she would not be able to integrate. The government would help new immigrants understand local culture through the grassroots.

SFCCA Secretary-General Lin Fang Hua mentioned that various associations have been actively helping new immigrants to integrate into the society for many years, such as Char Yong (Dabu) Association, Sam Kiang Huay Kwan, etc. Recently, the Singapore Amoy Association and new immigrant group Tian Fu Association also jointly organised a Mid-Autumn Festival Celebration. He believes that we should not overemphasise the difference between old and new immigrants, and instead, encourage the associations to organise activities to help new immigrants understand the local culture and invite them to join locals in preserving and promoting Chinese cultural traditions and values.

Hu Yaoqian Jasmine, a board member of Tian Fu Association and Nan Yang Hwu General Association, also shared her thoughts. She believes that what the young people lack is not the help that the old immigrants need, but rather the opportunity and a stage to showcase their talents, and if the club is willing to give them the opportunity, they would find young people joining them.

In response to the issue of prejudice faced by new immigrants, MP Zaqy Mohamad pointed out that different life experiences may lead to people having different thoughts, and the main point is whether we can be open-minded enough to accept and cherish the differences and characteristics between each other, and this is the aspect that we all need to work on. 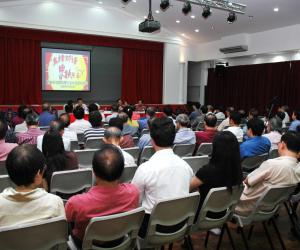