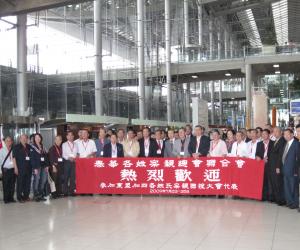 Representatives from Singapore warmly welcomed by organisers at the Bangkok airport

SFCCA Secretary-General Lin Fang Hua personally led a 35-member group, inclusive of SFCCA council members and 11 other representatives from kinship clan associations on the trip to Bangkok, Thailand to participate in the ASEAN Chinese Clan Associations Conference jointly organised by The United Chinese Clans Association of Thailand and Tourism Authority of Thailand on 23rd and 24th July 2009. The conference not only helped to strengthen the cohesion of the different associations in the Southeast Asia countries but also bridged close relationships with countries where clan associations are located at.

On the evening of 23rd July, The United Chinese Clans Association organised a welcome dinner at the Tio Chew Association of Thailand’s Auditorium, inviting more than 400 leaders from 14 participating Southeast Asia clan associations. Together with over 300 other members from The United Chinese Clans Association and the specially invited Guest-of-Honour, the total number of participants was close to 1,000, making it a feast for a thousand.

Mr Huang Han Liang, Chairman of The United Chinese Clans Association, mentioned in his welcome speech that, “It is an extremely meaningful event which deepens the ties and friendships between the clan associations of different countries!”

He also pointed out that the clan associations have existed for centuries along with the history of the Chinese in Southeast Asia, and these associations have not only made outstanding contributions to the economic prosperity and national stability of the countries in which they are located, but also played a significant role in passing on the history, culture and ethics of their ancestors.

ASEAN Secretary-General Mr Surin Pitsuwan was the first Guest-of-Honour at the welcome dinner. He expressed his appreciation to The United Chinese Clan Association for successfully organising the joint meeting to strengthen cooperation with the clan associations of partnering countries in the Southeast Asia region and promote friendship between the ASEAN Community and the wider Chinese community. He hoped that it would be a fruitful meeting and also believed that the cooperation between them would benefit the ASEAN as a whole. 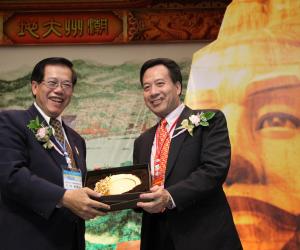 The opening ceremony of the ASEAN Chinese Clan Associations Conference was held in a hotel’s convention hall at 9am on 24th July. The highlight of the conference were the speeches given by the clan leaders, where they introduced the development of their clan associations and exchanged experiences with one another. Mr Lin Fang Hua, representative leader of Singapore, delivered an interesting speech saying, “We’re excited to be taking part in the event along with the passionate spirit of the citizens from the lion city and happy for being able to interact with the clan associations from various regions.”

The representative leaders of other countries and regions attending the conference made informative reports based on the different development characteristics and experiences of each country and region. These experiences and information would play an essential reference role in the development of the clan associations in Southeast Asia as a whole. 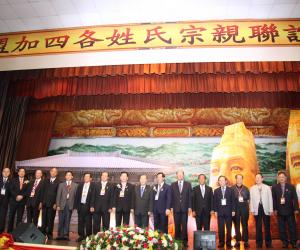 Group photo of all representative leaders

Prime Minister’s Arrival, a Collaboration between Government and Citizens

At 1pm on 24th July, Prime Minister Abhisit Vejjajiva arrived at the conference to preside over the most important meeting.

Prime Minister Abhisit Vejjajiva expressed his appreciation for the organisation of the conference. He mentioned that “This conference has selected important topics such as Thailand’s economic, tourism and culture, which feature the benefits of Thailand and their great potential for cooperation to the various partnering countries in the region.”

He also emphasised that the citizens of the ASEAN member countries are the true owners of ASEAN and the driving force behind ASEAN’s development. Therefore, the organisation of such a conference should be supported and encouraged. He also called upon the Chinese community in Southeast Asia to work together to strengthen unity and promote regional economic development. Other than that, he expressed that the Thai government would provide greater support to The United Chinese Clans Association of Thailand to host larger international conferences in the future.

It was decided that the 4th ASEAN Chinese Clan Associations Conference would be held in Jakarta, Indonesia in 2010.

In the name of the clan associations, SFCCA personally formed and led the tour group to participate in the conference, which was well received by the participating associations. Mr Tan Lian Ker, Secretary-General of the Federation of Chen Clan Association Singapore, and Mr KC Tan, Vice President of Singapore Lam Soon Tang Chong Huay, expressed that they hope to see more activities organised and spearheaded by SFCCA in the future.