Treasures of the Clans Opening Ceremony

Jointly organised by the Singapore Federation of Clan Associations (SFCCA) and the Singapore Chinese Cultural Centre (SCCC), the “Treasures of the Clans” exhibition is the first of its kind in Singapore to bring together the art collections of 16 clan groups. The opening ceremony was held on June 3 (Friday) at the SCCC multi-functional auditorium, with the Guest of Honour, Ms Low Yen Ling, Minister for Trade and Industry (MTI) and Minister for Culture, Community and Youth (MCCY). Close to 100 people attended the event.

The exhibition aims to unite the Chinese community and further deepen the ties between the clan associations, SFCCA and SCCC. The SCCC, an initiative proposed by the SFCCA, has been established for five years. This exhibition is one of the highlights for the celebration of the 5th anniversary of the SCCC. 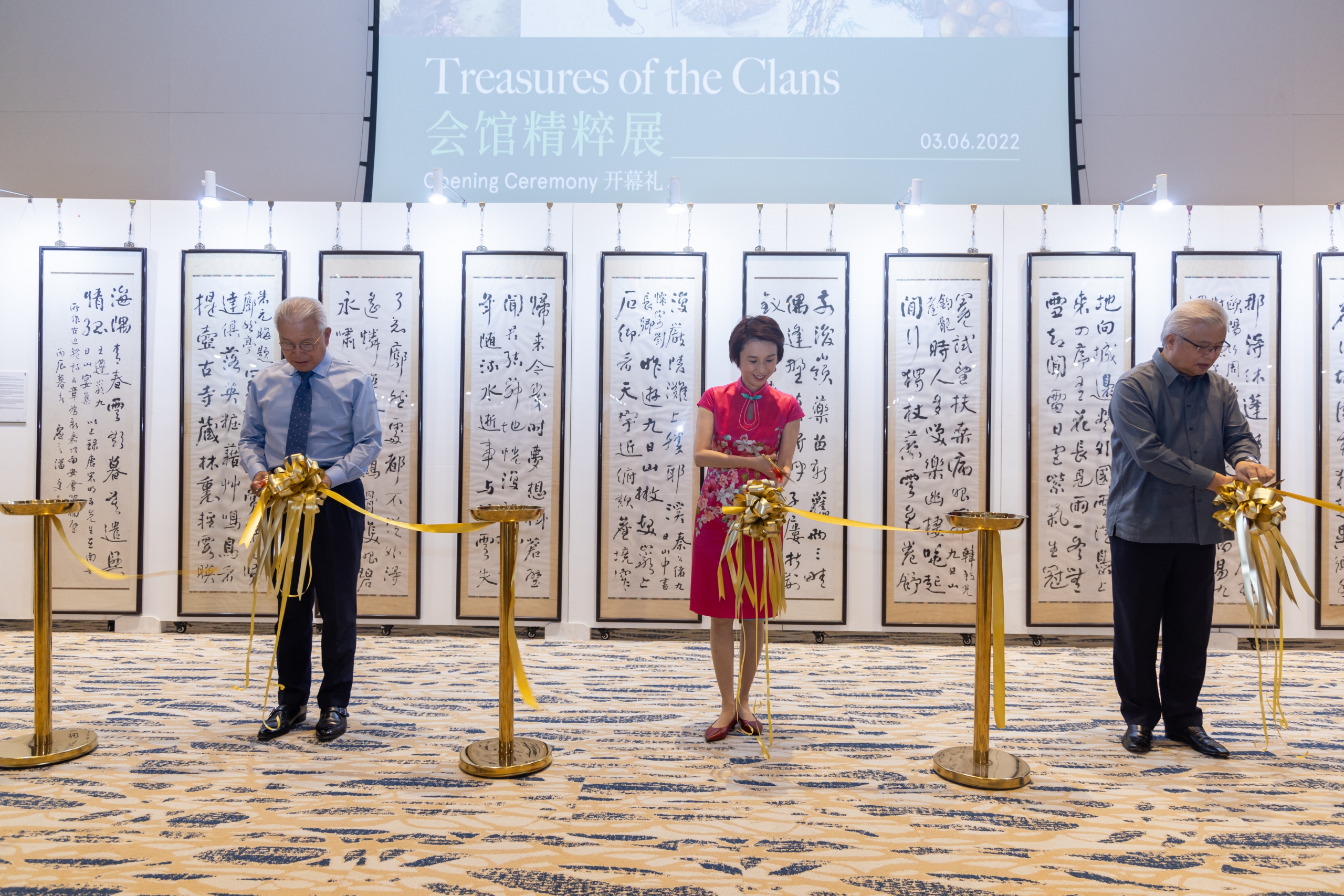 Speaking at the opening ceremony, Minister for Trade and Industry and Minister for Culture, Community and Youth Ms. Low Yen Ling said, “The exhibition features more than 80 pieces of artwork and calligraphy that are rarely seen in Singapore. This allows Singaporeans to experience the unique charm of local Chinese culture, thus further increase their knowledge and understanding of the local Chinese community developments.” 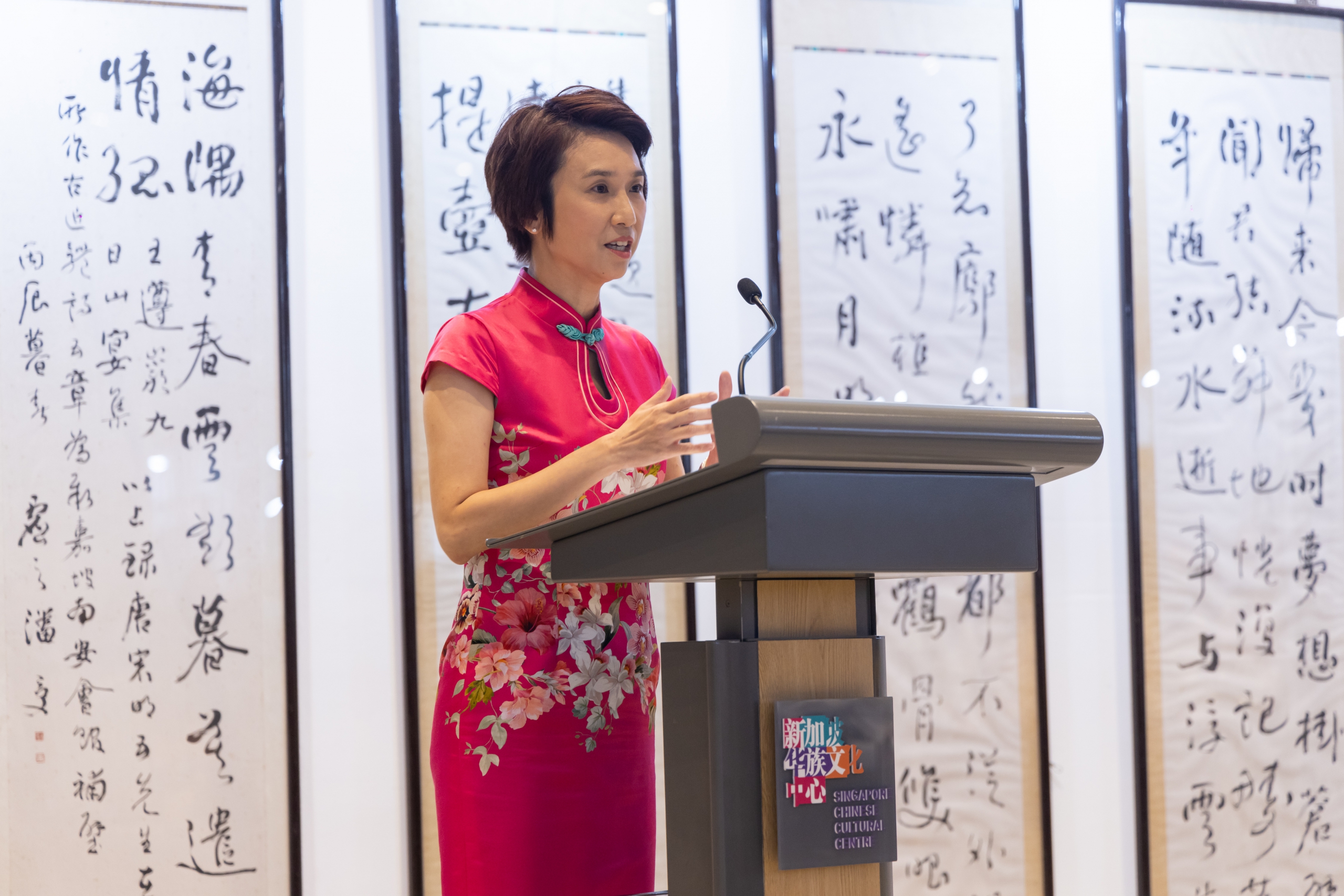 Ms. Low Yen Ling, Minister for Trade and Industry and Minister for Culture, Community and Youth, delivering a speech at the opening ceremony of the exhibition.

The “Treasure of the Clans” features calligraphy and paintings by renowned artists from home and abroad, such as veteran local artists like Lim Tze Peng and Liu Kang, and famous overseas artists such as Xu Beihong. Among them, Xu Beihong’s “Running Horse” is one of the main attractions at the exhibition. Xu donated the painting to Ann Kway Association in 1939, and this is the first time in more than 80 years that Ann Kway Association has exhibited it publicly. 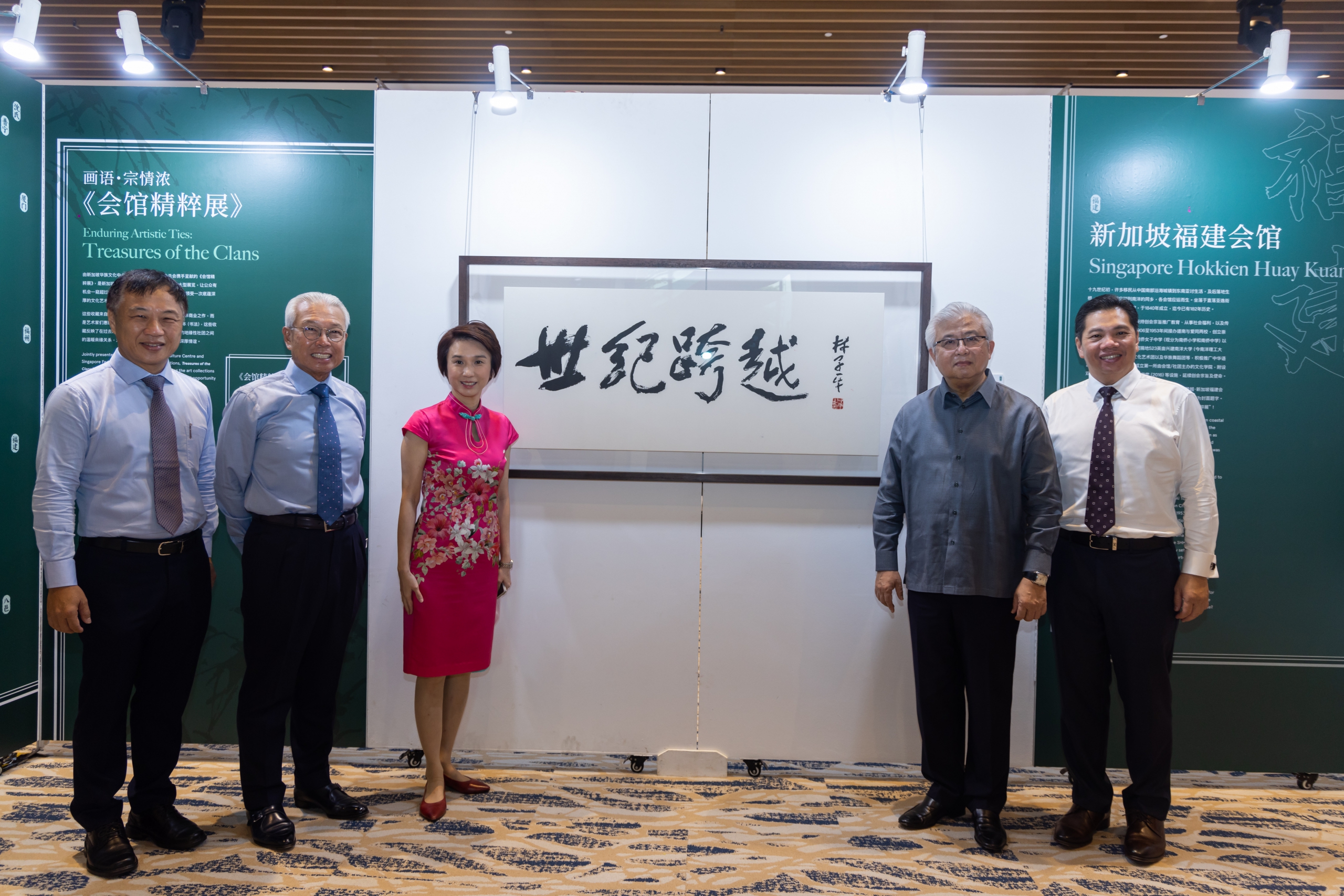 Ms. Low Yen Ling, Minister for Trade and Industry and Minister for Culture, Community and Youth, together with Mr. Chua Thian Poh (second from left), Chairman of the SCCC and Honorary President of the SFCCA, President of the SFCCA Mr. Chua Kee Seng Thomas (second from right), Chairman of the General Affairs Committee Mr Lee Cheng Chye William (first from left) and Chairman of the Social Service Committee of the Hokkien Huay Kuan Mr Neo Kah Kiat (first from right), together with “Century Leap”, an exclusive inscription by renowned local painter Mr Lim. Tze Peng for the 180th Anniversary of the Hokkien Huay Kuan.

Apart from visiting the Singapore Chinese Cultural Centre to see the art collection on display, the public can also access the online exhibition by clicking here. The exhibition will be on display till July 31.