Uncover the Magic of AI and its Popular Usage

Organised by SFCCA under the “New Immigrants and Singapore Society Experiential Series”, the “Uncover the Magic of AI and its Popular Usage” Zoom webinar successfully concluded on 30 January 2021. The webinar was attended by 62 participant, and was broadcast live on SFCCA’s Facebook page. Invited speaker, Dr. Wu Yan from Agency for Science, Technology and Research (A*STAR), introduced to the participants the marvels of Artificial Intelligence (AI).

A group photo at the start of the webinar

With the development of the times, AI has gradually entered and became an indispensable part of our daily lives. During the webinar, Dr. Wu shared how the development of AI and how we have adopted in in our everyday life, bringing new conveniences and economic benefits to modern living, as well as the approaches taken to realised the National AI Strategy by 2030. Through his sharing, it was hoped that participants would realise the importance of AI.

AI was first conceptualised and mentioned by American computer scientist John McCarthy in 1957, to broadly refer to the science and engineering that have created intelligent machines. As a form of engineering science, AI encompasses the theory, method and application of computer system’s learning ability, reasoning ability and self-correction ability. Dr. Wu pointed out that in the 70 years of development process, AI experienced about three ups and downs. It was only in 2006 where there was a breakthrough, leading to the boom of AI. Dr. Wu attributed the ups and downs of AI’s development over the years to the investment of funds and the impact of the environment. 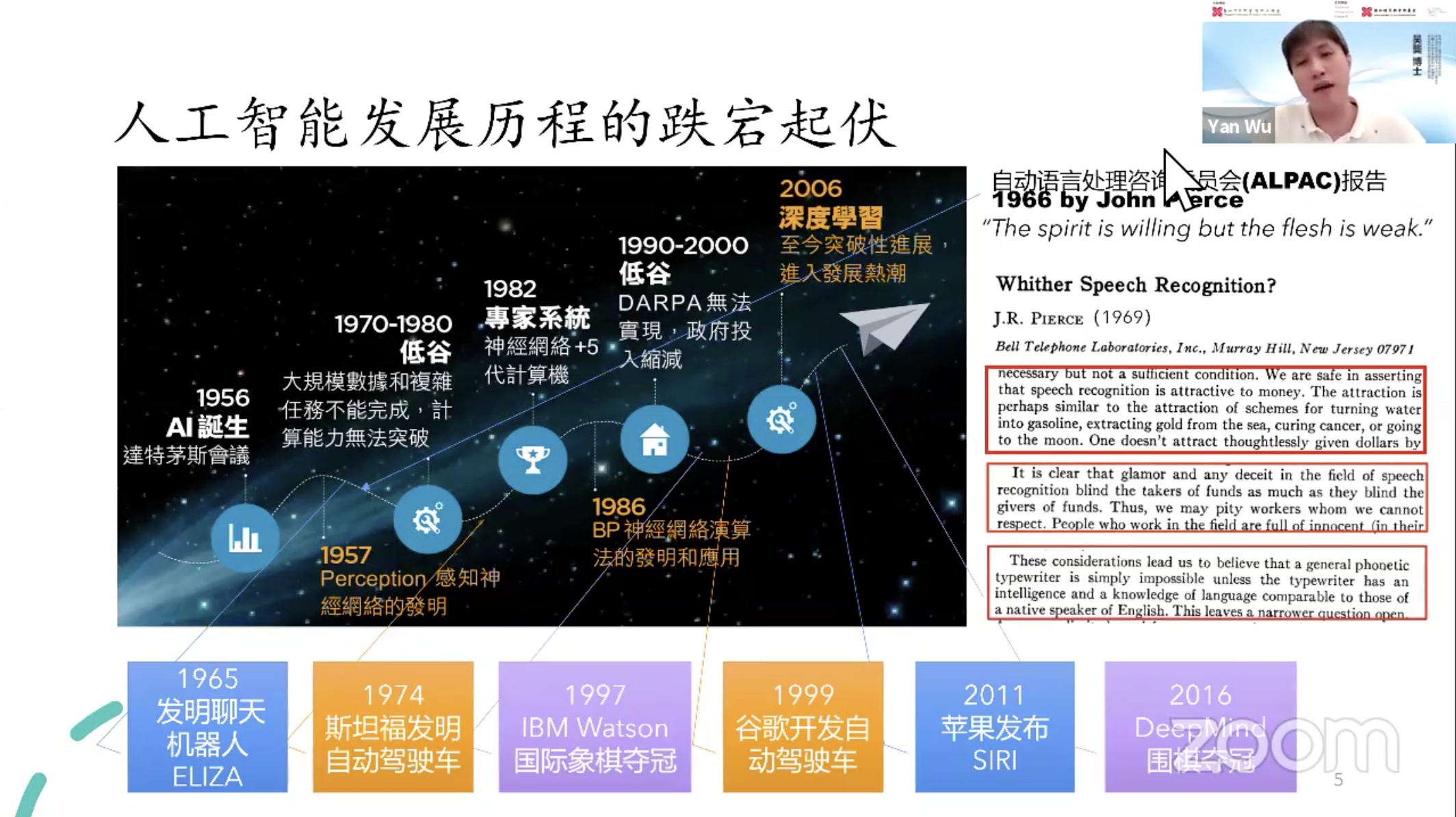 The development of AI over the years

Dr. Wu addressed the concern that the wide use of AI may lead to everyday tasks and jobs being replaced in the future. Based on the history of the Industrial Revolution, each industrial revolution has resulted in a significant increase in the world’s gross domestic product, showing that every advance in AI technology can increase productivity and improve the quality of life of the general public, spawning more new industries and freeing up more jobs. Hence, Dr. Wu said that the public need not worry worry too much about jobs being replaced by AI. 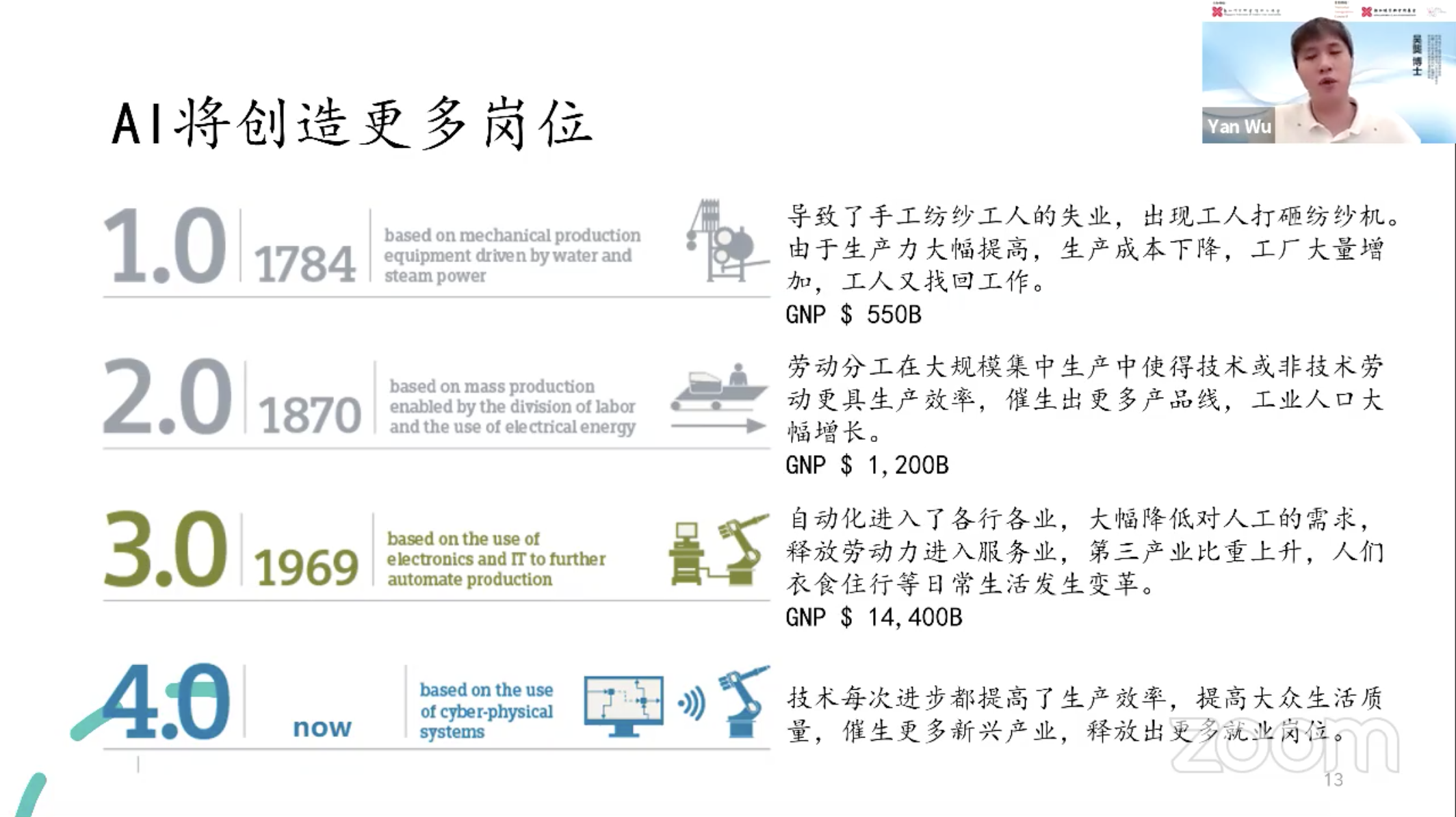 Dr. Wu then listed several examples of AI’s applications, such as the automated transcripts currently used by the State Court, which use AI skills to help document court proceedings. In addition, security robots developed by A*STAR also use AI skills to ensure public safety and assist local police forces in patrolling the foreign worker dormitories during the COVID-19 outbreak.

Practical application of AI in the community

Wrapping up the webinar, Dr. Wu mentioned that in order for Singapore to realise the National AI Strategy and be a leader in the development and use of AI, AI Singapore has introduced a flagship programme named “100 Experiments” (100E) targeted at solving industries’ AI problem statements and helping them build their own AI teams. 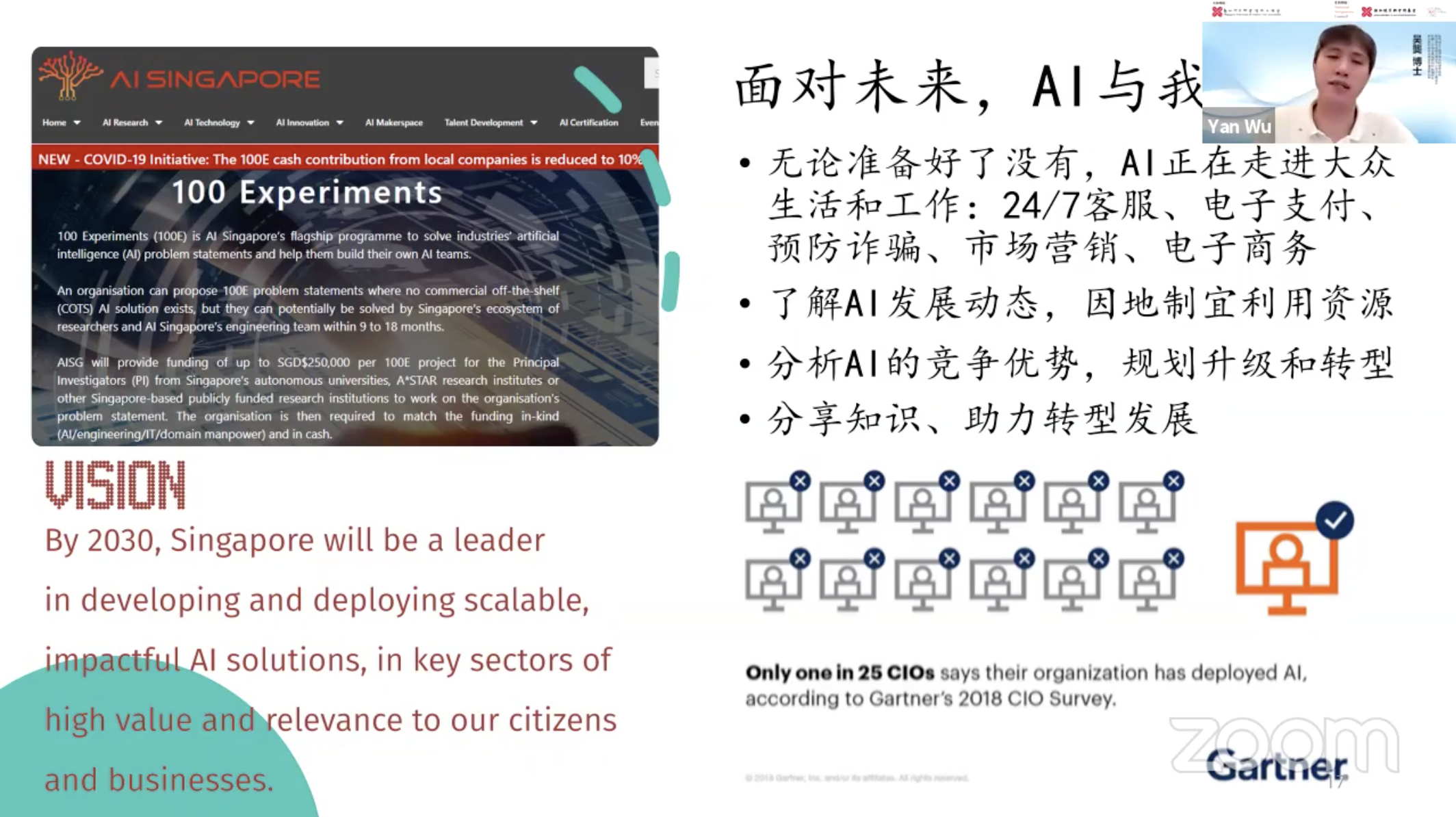 Through this lecture, participants have broadened their horizons and gained a deeper understanding of AI.