On 27th January 2020, the third day of the first lunar month, Singapore Federation of Chinese Clan Associations (SFCCA) and Singapore Chinese Culture Centre (SCCC) jointly organised Spring Reception. Apart from the performances, the dazzling array of delicacies and the various Spring Festival activities, the Guest of Honour Deputy Prime Minister and Minister for Finance Mr Heng Swee Keat, Chaiman of SCCC and Honorary President of SFCCA Mr Chua Thian Poh, and President of SFCCA Mr Tan Aik Hock all focused on the development of the country, SCCC and SFCCA in 2020 in their respective speeches.

Mr Chua Thian Poh was the first to make his speech among the three. He stressed on the three main policies that SCCC had drawn up this year. The first policy was to allocate funds to cultural arts troupe organisations to promote their products and support the publication of cultural magazine at the same time; the second policy was to synthesise tradition and innovation, expanding the audience group of the Centre, like incorporating Chinese culture with pop music or street dance to attract the attention of the younger generations etc.; lastly was the need to keep pace with the times, making good use of technology and social media. 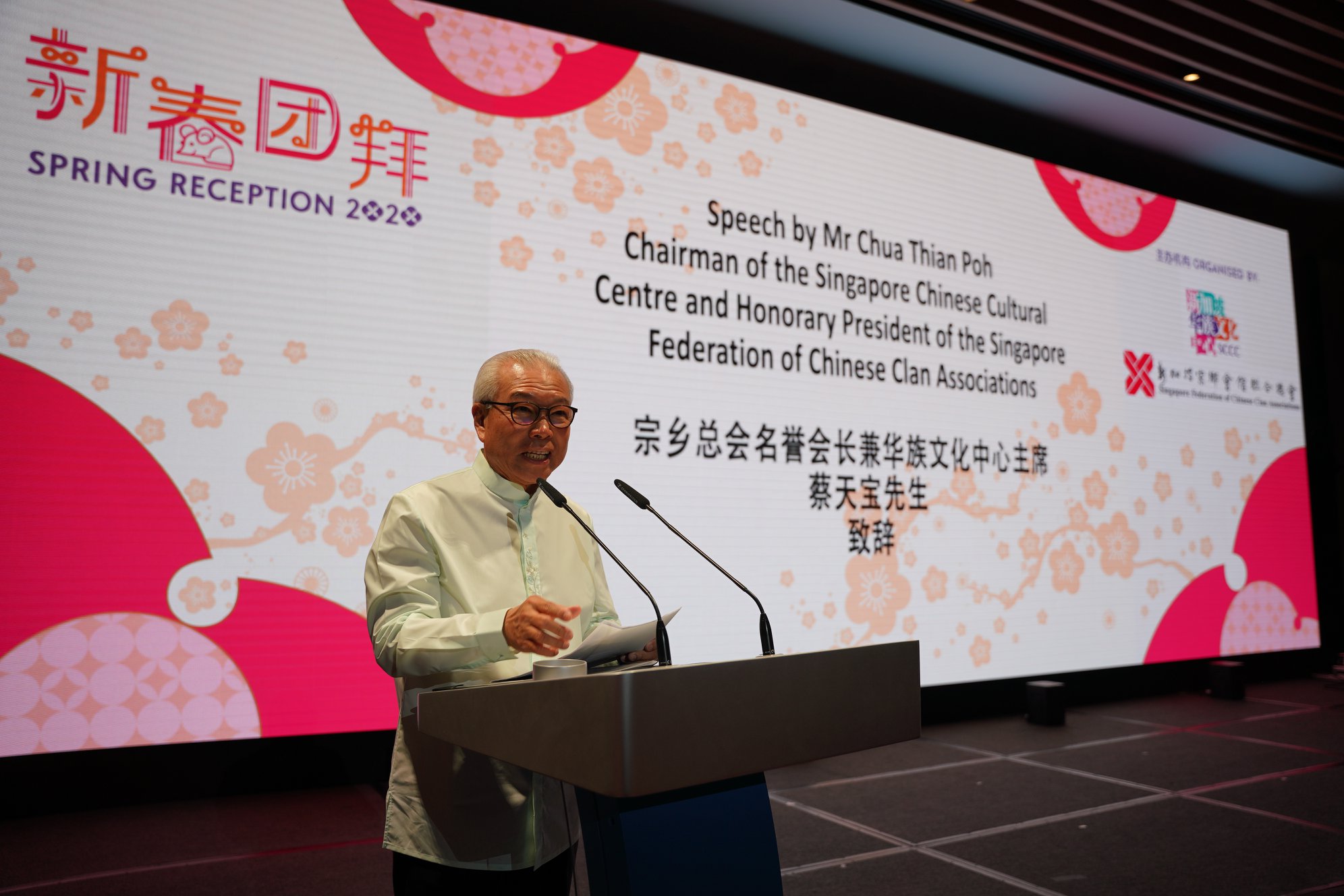 President of SFCCA, Mr Tan Aik Hock, then laid out SFCCA’s 2020 blueprint. On one hand, SFCCA would continue to pay attention to the underprivileged group in the society, pushing forth a rehabilitation project together with Singapore Corporation of Rehabilitative Enterprises (SCORE), providing aid to children between 6 and12 years old whose parents who are incarcerated; on the other hand, SFCCA hopes to expand and strengthen its pool of volunteers, bringing more like-minded people in to take part in meaningful activities. In addition, in conjunction with SFCCA’s 35th anniversary, a series of celebratory events along the theme of “Our Legacy, Our Future: Breathing New Life into Traditions” has been planned. In the pipeline are a fund-raising gala dinner for 1,000 guests this year-end and the documentation of local Chinese clans’ history.

In conclusion, SFCCA and SCCC plan to devote themselves to benefit the community, except that the former will target the people, and the latter would incline more towards cultural development. 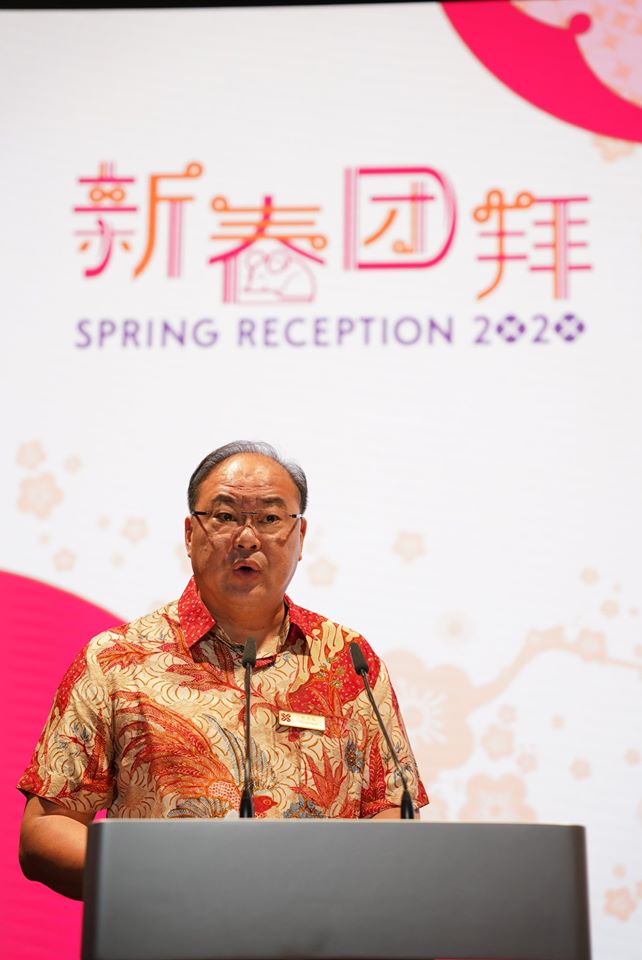 Thereafter, DPM Mr Heng Swee Keat made the Wuhan virus the main talking point of his speech. He expressed that the experience from Severe Acute Respiratory Syndrome (SARS) has strengthened the government’s ability to deal with the Wuhan virus. At the same time, businesses and grassroot organisations, medical groups as well as international organisations are also fighting the virus, hence, citizens can carry on with their life as per normal and need not worry, even though it is still important to take precautions, spread relevant information regarding this issue while remaining vigilant and avoiding the spread of fake news.

DPM Heng Swee Keat also took the opportunity to reach out to the bosses at the event, hoping they would raise awareness and vigilance within the company after the long weekend break, as well as to pay attention to their employees’ health status. This year, thermometers and thermal scanners were placed at the entrance of the Spring Reception; masks and hand sanitisers were also prepared beforehand for the guests to use. 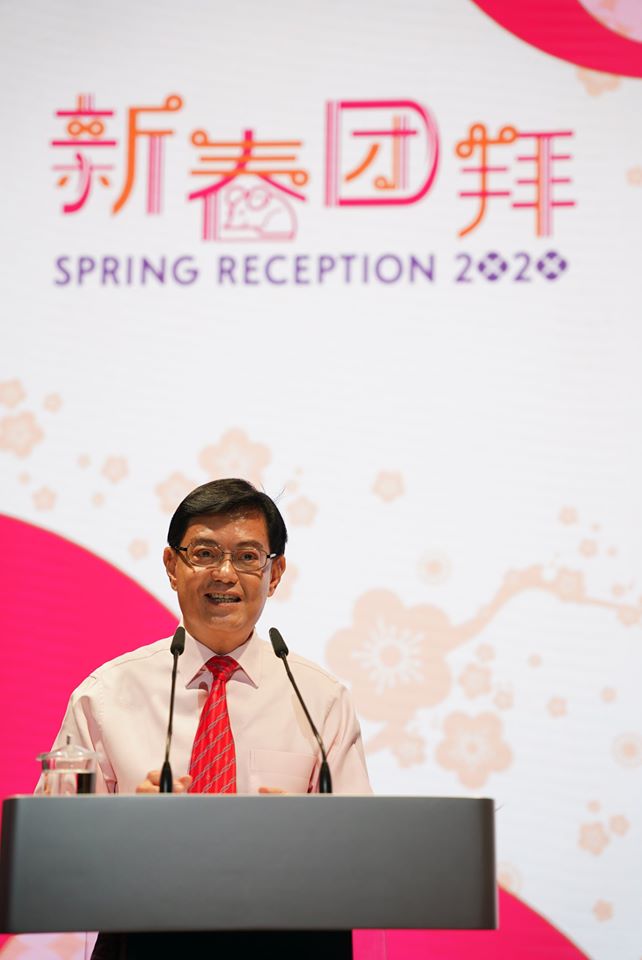 While the spread of the coronavirus should be taken seriously, there was not much impact on the festive atmosphere at the Spring Reception 2020 as seen from the roaring applause that followed every performance. The drumbeats played by DRUM FENG, an arts organisation, were crisp and loud, filling the audience with enthusiasm and complementing the melodious flute music that came in near the end. Additionally, Natheo Langlet Rui Yang, a five-year old actor from Nam Hwa Opera, performed the Teochew opera powerfully despite his young age. Amazingly, Natheo bore a striking resemblance to the head of the imperial guards when he put on a straight face. 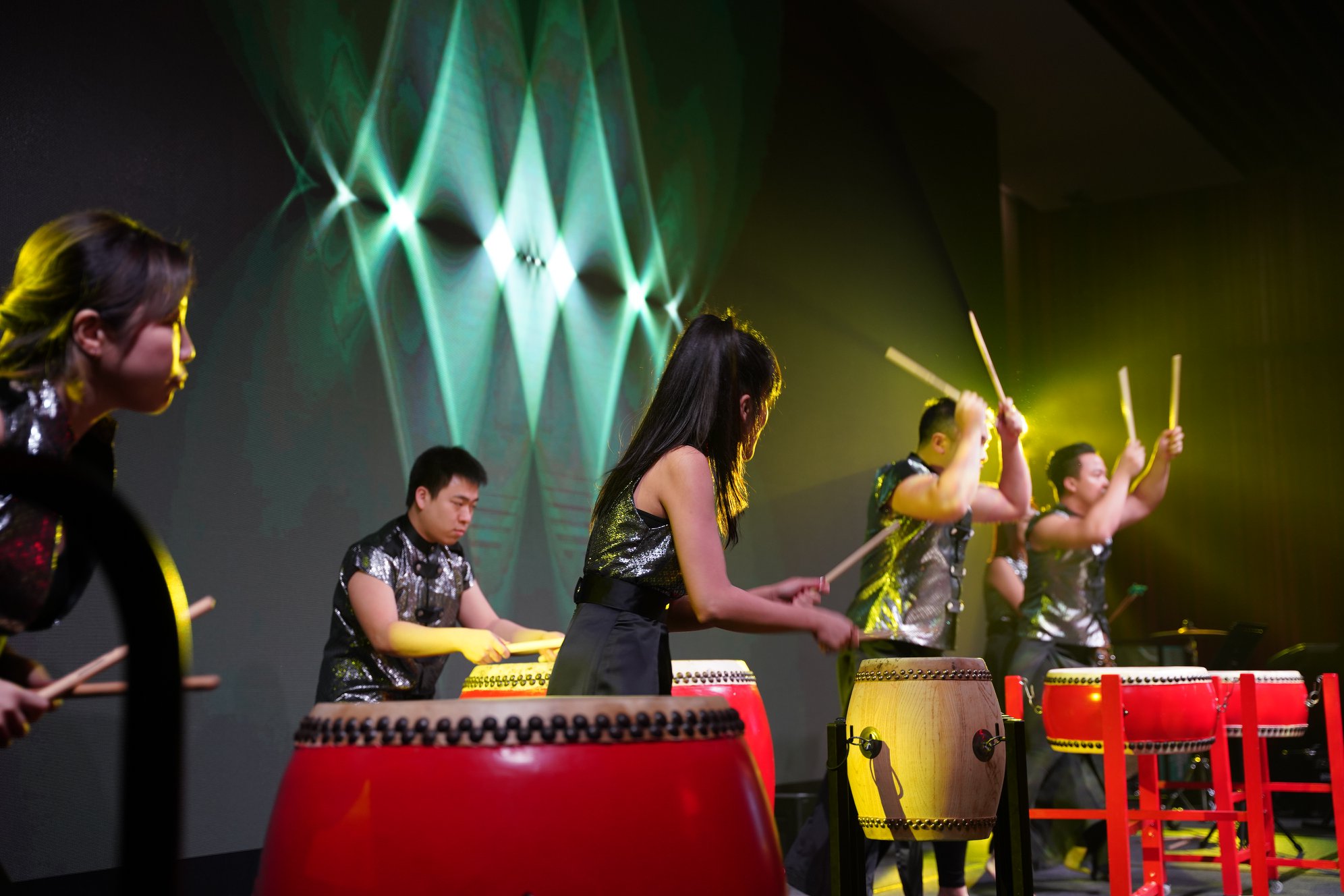 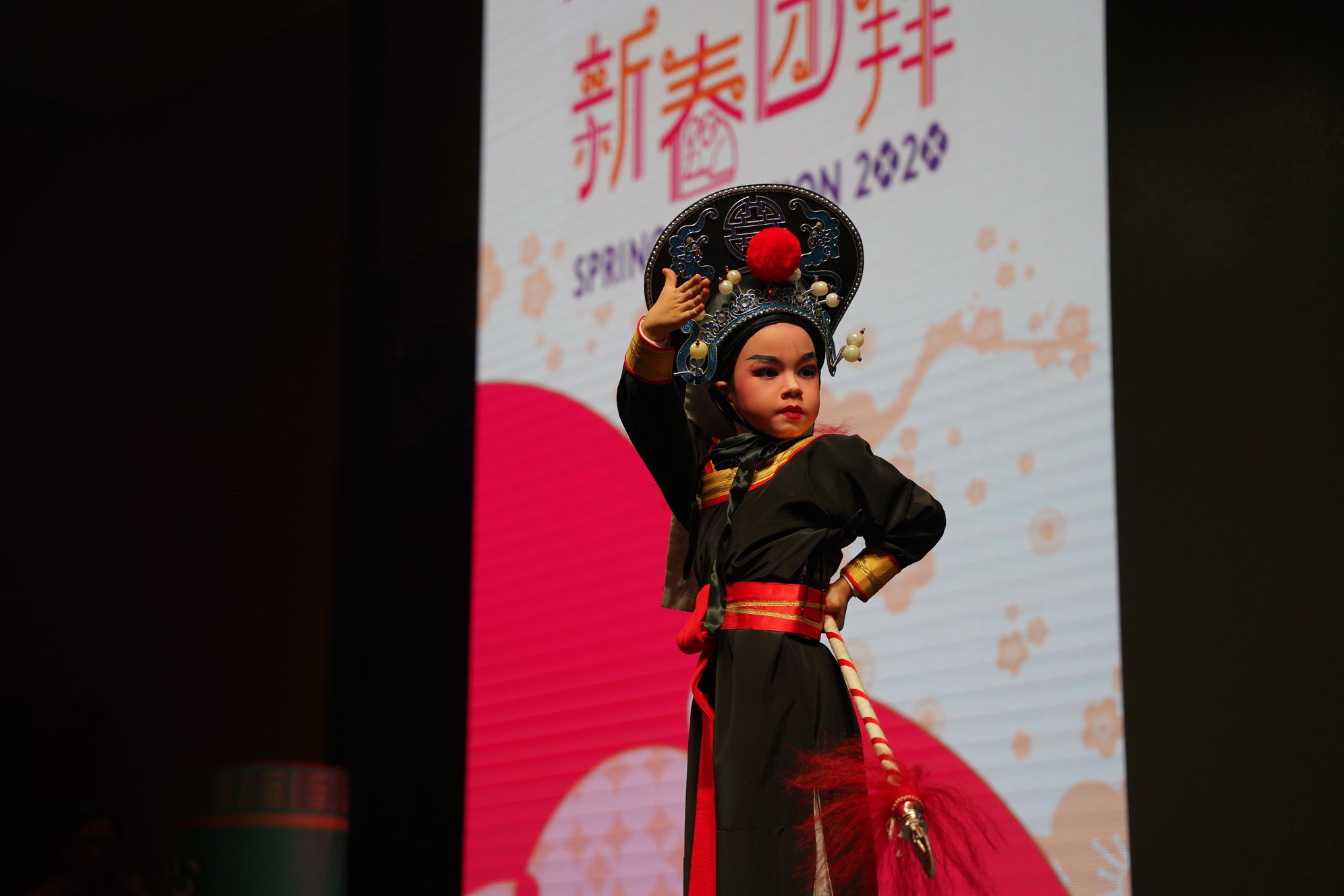 Of course, the highlight of the Spring Reception was the exchange of New Year greetings. Following the host’s cue, the guests quickly stood in the shape of an octagon while facing one another. On the count of three, everyone took a bow as the electronic firecrackers in front of the stage went off with a resounding ‘boom’, drowning out the New Year greetings being exchanged. 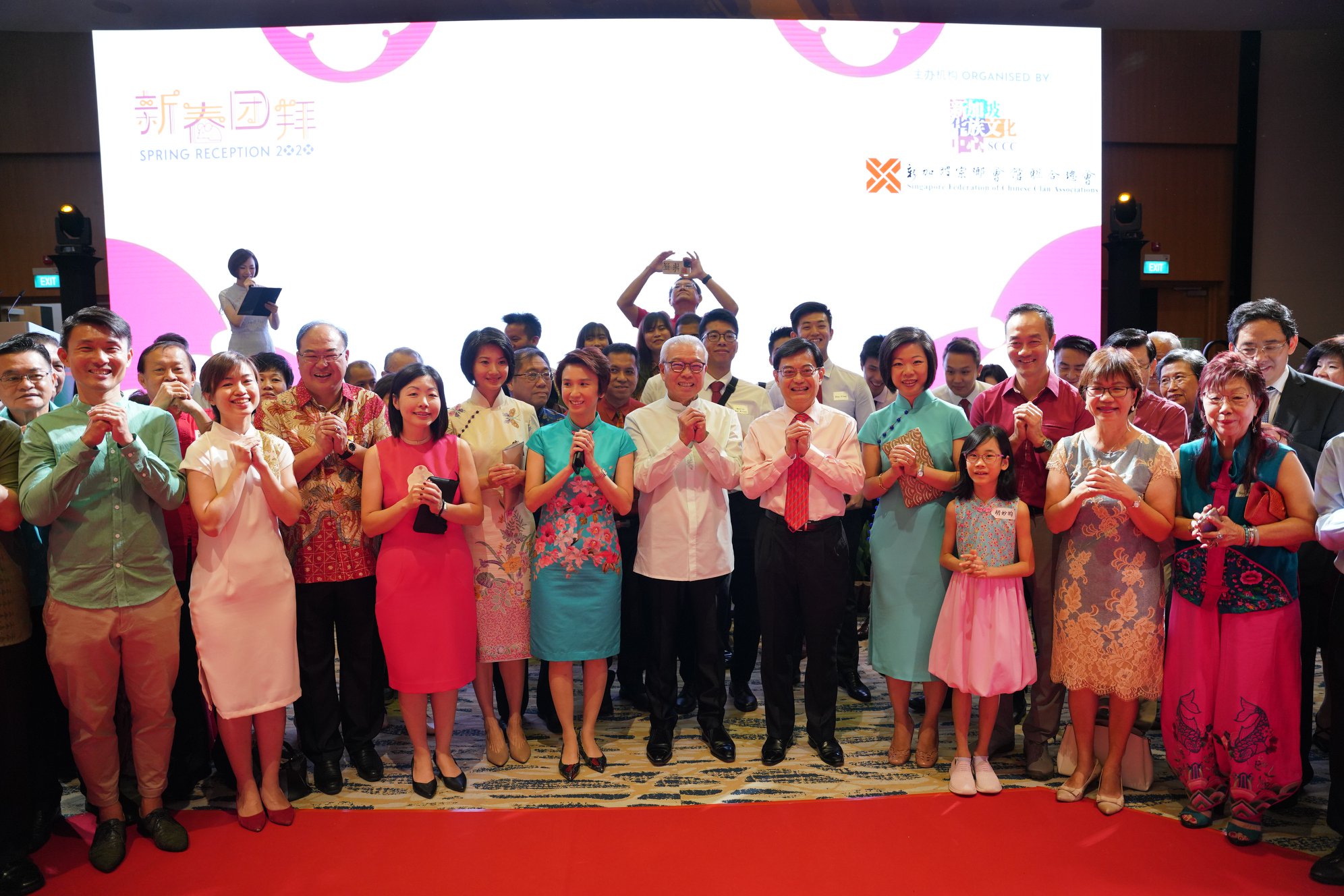 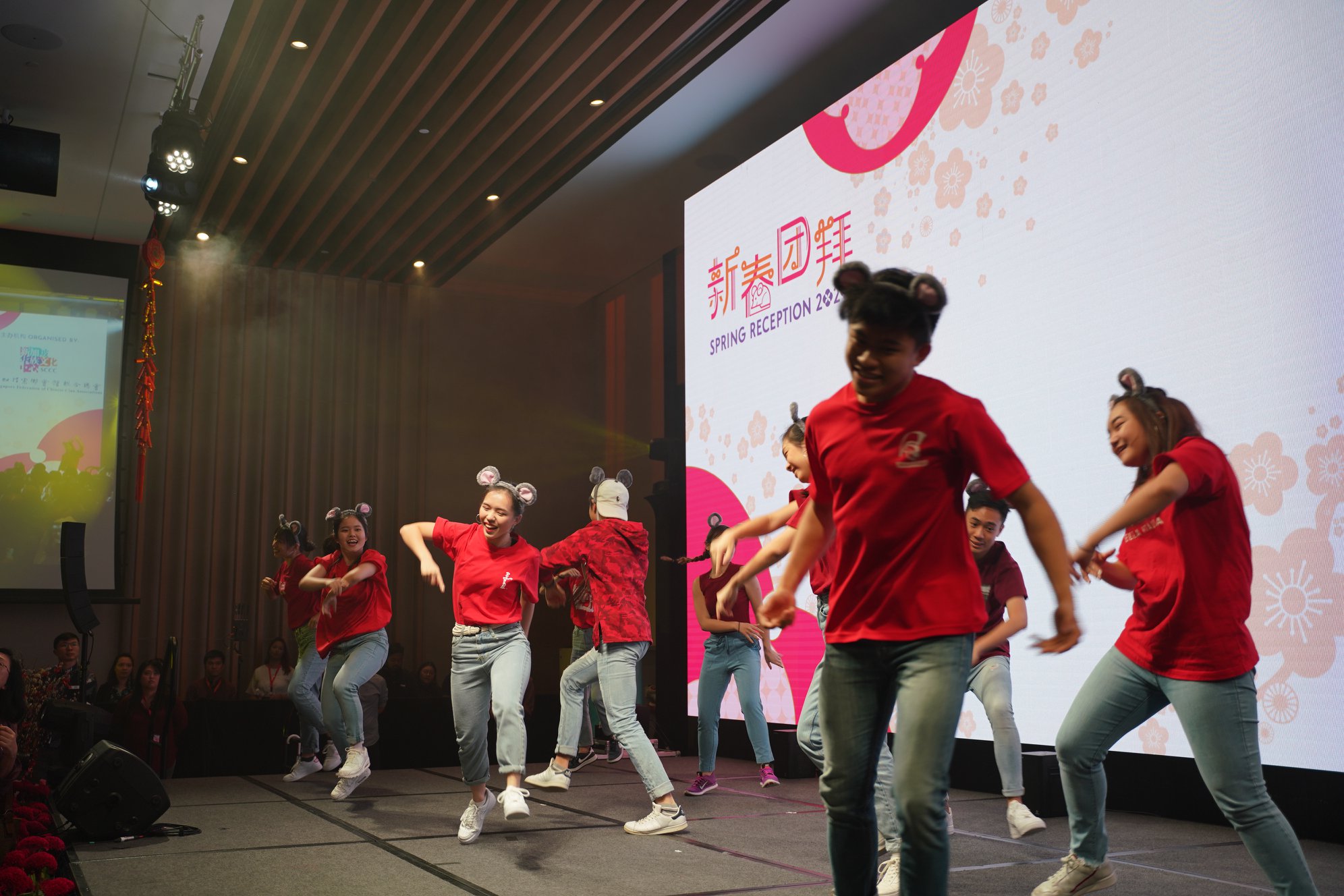 The adorable “mice” dancing during the flash mob

After the exciting performances came to an end, the venue transformed into a food paradise. Little stalls were set up to provide local delights, like roti prata, fried Hokkien mee, satay, etc., while a scrumptious buffet was held outside the hall. Artists also came forth to write festive spring couplets and create beautiful ink wash paintings which won the praise of guests. Finally, in the midst of the exchange of greetings and the consumption of delicious food, the Spring Reception 2020 came to a successful end. 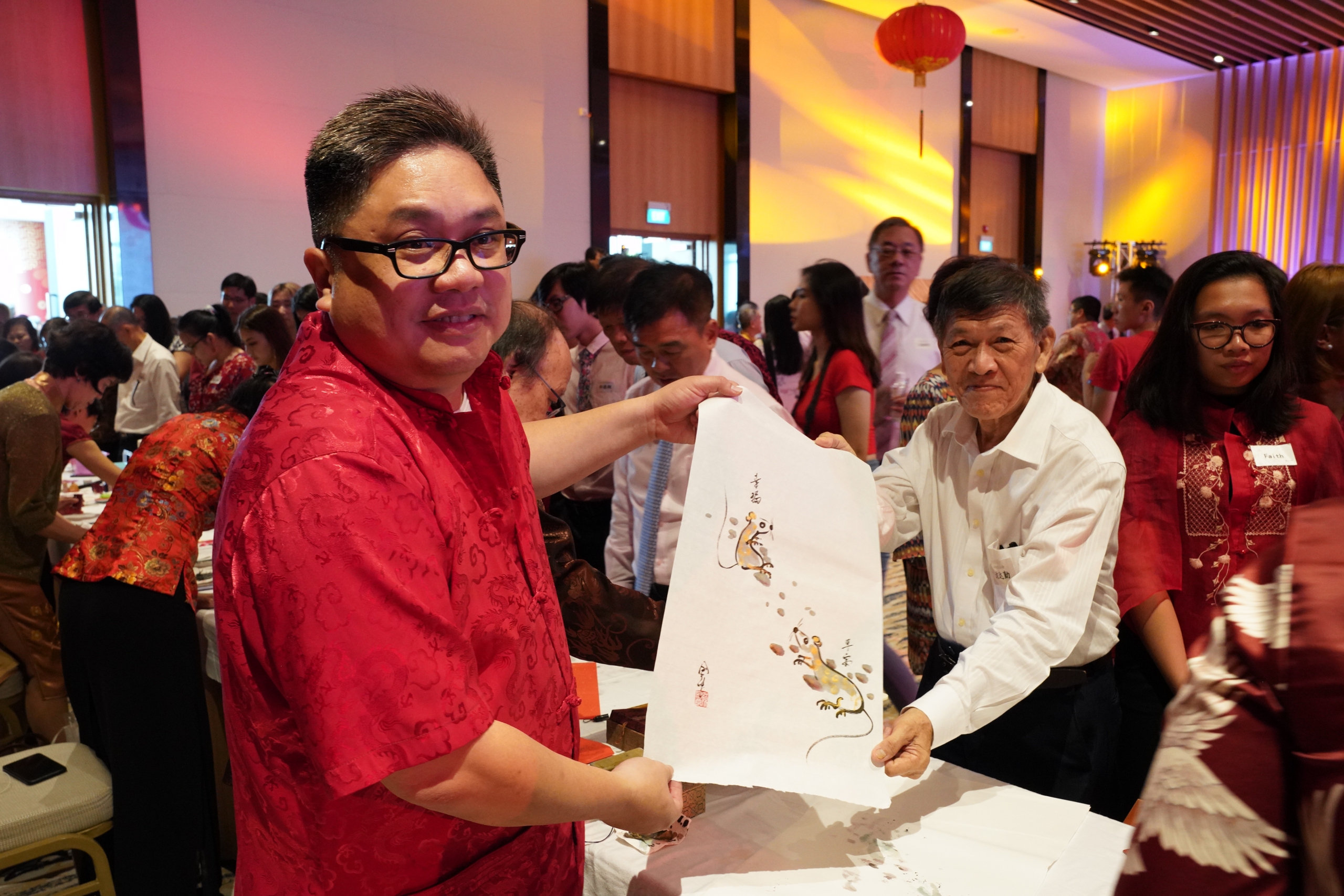 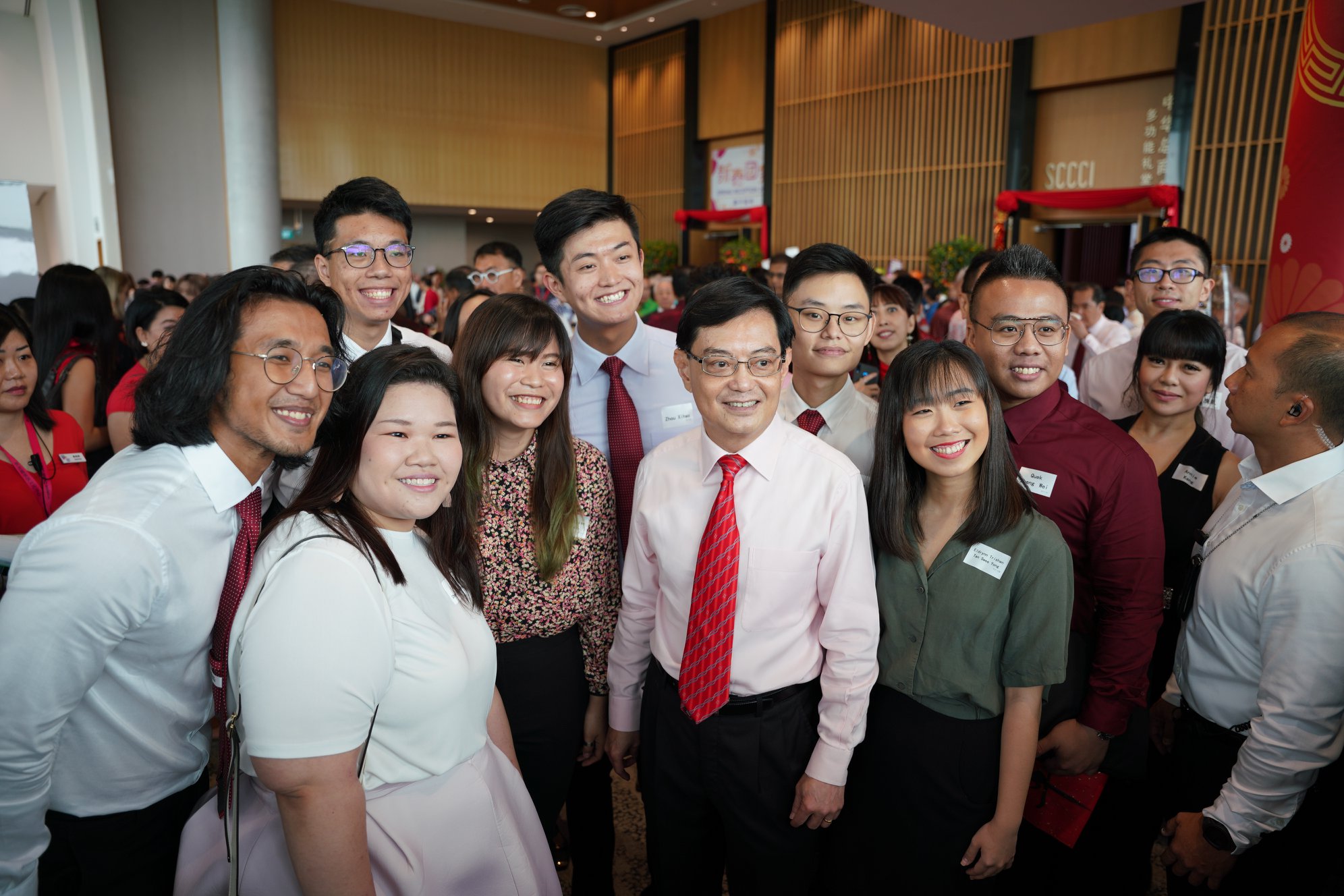 Everyone at Spring Reception 2020 enjoying themselves to the fullest