At 9am on 26th May 2012, the General Affairs Team of the Singapore Federation of Chinese Clan Associations (SFCCA) Youth Committee and the National Youth Council held the “Young Leaders Brainstorming Camp” in the conference hall at *SCAPE. The camp brought together 90 young people aged between 16 and 45, from various clan associations, new immigrant organisations, the Singapore Chinese Chamber of Commerce & Industry (SCCCI) Young Entrepreneurs Network, Business China, Chinese student groups, etc. They came together to brainstorm about future clan association activities, share their experiences and discuss clan association activities that may be suitable for young people.

In his speech, Mr Thomas Pek, Chairman of the SFCCA Youth Committee, said that the Committee has been looking for activities suitable for young people. The purpose of this camp was to create a platform for young leaders to come together to research and discuss their own ideas about clan association activities. He hoped that after the brainstorming, the young leaders would bring these ideas back to their respective clans, and then share and implement them, so as to organise more novel activities, renewing and energising clan associations.

The activity was divided into two parts. After the morning session, during which participants were grouped into different groups to discuss various topics, the participants presented their ideas during the afternoon session. The 90 participants were divided into 6 groups, on art, sports, children, youth, the elderly, and environmental protection respectively. They conducted a heated two-hour discussion. After the discussion in the morning, the National Youth Council and the National Integration Council also presented relevant information on funding for activities, including the $3000 Young Change Makers (YCM) grant, and the Community Integration Fund, which provides funds of up to $200,000. Participants were interested in applying for the funds, and many asked about the application process and requirements. 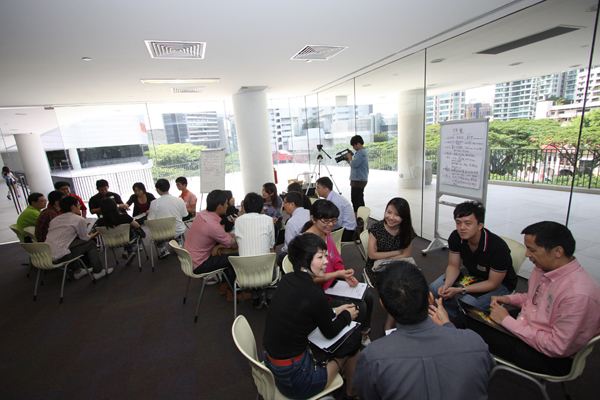 Participants were grouped into 6 groups for discussion, according to the various topics

After lunch, the six groups sent representatives to present activity proposals that they had discussed. Those who discussed about art proposed to record historical information, customs and culture, life and so on in the form of micro-movies, and to use social media to spread clan associations’ influence to young people, so that more young people can understand more about traditional culture.

The sports group proposed that 10 to 20 clan associations should set up a common sports interest group (such as basketball). In addition to being able to interact and compete with each other, they can also organise 100-200 volunteers to plan activities. The children’s group proposed to hold a “Little Entrepreneur Competition” to allow primary school students to conduct charity sales, learn from the experience, and grasp the meaning of giving back to society. The proceeds will be donated to charities. The youth group hoped that youth committees could hold regular gatherings or meals, so that they can get to know each other, learn from each other’s successes and discuss the possibility of organising activities together.

On the other hand, the group that discussed about the elderly presented plans to organise a series of medical talks, exhibitions and Chinese medicine clinics to encourage senior citizens to participate. The Environmental Protection Group believes that it is possible to encourage the establishment of environmental groups to promote green concepts (such as conserving water and electricity) and to gather regularly to promote interaction between the various clan associations.

Sim Ann conversing with the participants

Ms Sim Ann, Senior Parliamentary Secretary at the Ministry of Education and the Ministry of Law, also attended the afternoon session. After listening to the groups present the results of their discussions, she also had dialogues with the participants and shared her opinions. SFCCA President Mr Chua Thian Poh, Secretary-General Mr Patrick Lee Kwok Kie, Vice Secretary-General Mr Perng Peck Seng and other council members also took the time to attend the event.

Ms Sim Ann expressed affirmation of the young leaders’ communication in Chinese and their ideas for the future development of clan associations. She said that the various activities proposed by the participants were constructive and a good start, and emphasised the importance of the sustainability of the activities.

In the one-and-a-half-hour dialogue, participants inquired about some of the policies of the Ministry of Education, such as expanding the scope of co-curricular activities, and discussed and made suggestions to Ms Sim Ann regarding topics such as the Singapore Chinese Cultural Centre and traditional culture. The event officially ended at 4pm.