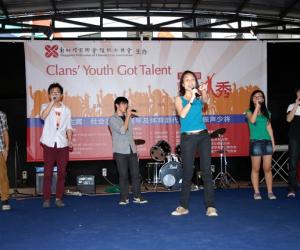 On 4th December 2011, the General Affairs Team of the Youth Committee held the “Clans’ Youth Got Talent” at the Youth Park on Orchard Road, allowing young people to compete with their talents, develop their creativity and showcase the vitality of clan associations.

This is the first time that SFCCA is organising the Talent Show, which has won the support of more than 10 clan associations, the National Youth Council and Business China. Many new immigrant associations, such as the Tian Fu Association, the Shanxi Association, the Chinese Scholars and Students Association in Singapore, etc. also participated in the competition.

The guest of honour, Minister for Community Development, Youth and Sports Mr Chan Chun Sing and Member of Parliament Liang Eng Hwa arrived at 3pm. Accompanied by SFCCA Mr Chua Thian Poh and various council members, they visited exhibition booths of the 12 clan associations, which provided information on the activities and unique features of the associations. In addition, photo corridors that described the history of early Southern immigrants in a story-like manner were also installed, making the exhibition both interesting and educational.

The competition started immediately after the guests were seated. A rock band got the ball rolling with Jam Hsiao’s “Princess”, and the momentous music stirred up the atmosphere.

The contestants of the talent show were all young people under 45 years old. The youngest contestant is Xu Huizi, who is only 11 years old, from Xiamen Association. She sang Jolin Tsai’s song “Bravo Lover”, showcasing confidence and charm on the stage, earning her warm applause from the audience.

The organisers invited former beauty queen and founder of a private etiquette school, Teo Ser Lee, Vice President of Mediacorp’s Chinese Variety Program Production Department Lee Ee Wurn, and SFCCA Council Member Mr Lee Peng Shu, to serve as the jury for the competition. After much deliberation, Shaca, a vocal band composed of six people from Chin Kang Huay Kuan, won the first prize. The runner-up and the second runner-up were won by Liao Yongyi of the Kowloon Club and Li Yongnan and Xu Weizhong of the Shanxi Association, who performed Nanquan Wushu and modern jazz dance respectively. The winners will perform on stage at the 2012 River Hongbao.

In addition, in line with our Facebook campaign, the “Most Popular Award” was also added to allow the supporters of the participating teams and the public to vote online for their favourite performers. After two weeks of voting, Guo Maxia of Bukit Panjang Hokkien Konghuay got more than 400 votes, winning the award.

Keeping pace with the times, showcasing the youth of SFCCA

In his speech, Minister Chan Chun Sing also praised the event’s significance. He expressed that he was glad that SFCCA has been keeping pace with the times, adding new concepts into its events and helping to integrate new immigrants.