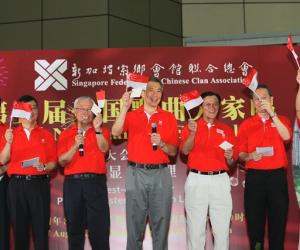 The event was graced by Prime Minister Lee Hsien Loong. He was named the first Patron of SFCCA, since the association’s inception 25 years ago. It is with great hopes that in collaboration with the Chinese Development Assistance Council (CDAC), SFCCA would be able to improve relations between the government and the Chinese community. This is on top of promoting the Chinese community to be a progressive and cohesive one, in promoting Chinese culture and strengthening community bonds.

At the event, along with Prime Minister Lee Hsien Loong, other political leaders and SFCCA’s council members led the crowd in singing the heart-warming “Count on Me, Singapore”. 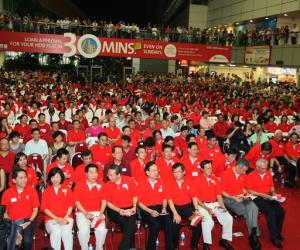 Into its fifth year now, the event was supported by a total of 19 clans which were represented by their members in the performances. Not only that, students from Nan Chiau School and Kong Hwa School (set up by Tian Fu Association, Tian Jin Association and Singapore Hokkien Huay Kuan) also took part in the singing of patrotic National Day songs. There was a total of close to 400 performers. Besides the sing-along of National Day and famous songs amongst the Chinese community, various clans sent representatives to perform and sing in their own dialect to express their well-wishes for Singapore.

This is the first year this event is held in the heartlands. Previously, the event was held at SFCCA or People’s Park Complex.