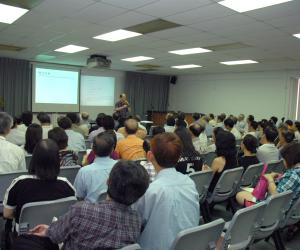 To promote good organisation management skills, strengthen and enhance the knowledge of leaders and staff from local clan associations, SFCCA has organised the “Administration and Management Course for Clan Associations” on three consecutive Saturdays (15th, 22nd, and 29th May 2010). A total of 88 participants from 38 member associations attended the course.

With years of experience in administration, Mr Kua Soon Khe, who served as the Deputy Secretary-General of Singapore Chinese Chamber of Commerce & Industry and Secretary-General of Singapore Hokkien Huay Kuan, was the speaker for the course. He spent over a year compiling over 200 pages of handouts and shared his wealth of experience with the participants.

He began the session by sharing a photo of a dinosaur fossil with the caption “Adaptation or Elimination” and some examples to convey the message that associations should constantly keep up with time and update themselves.

He first explained the definition of an association and introduced the different forms of it. He also mentioned that the President, Secretary, and Treasurer are the three persons with an extremely important position. Once an association is registered, the President, Secretary, and Treasurer must ensure that proper accounts and records are kept. If the total annual income or expenditure of an association exceeds $500,000, a qualified auditing firm should be hired to audit the accounts. At the same time, the directors of the association have the responsibilities to formulate, implement, and supervise the framework of activities throughout the year, and to divide their duties and work in cooperation under the constitution.

During the session, he invited the participants to raise questions, and one asked if the constitution of the societies and Societies Ordinance conflicted, should the former be prioritised? With the comparison of “the law of a country and the rules of a house”, Mr Kua pointed out that in such a case, the “law of a country” (societies ordinance) should be followed first. Whilst amused, the participants learnt from Mr Kua’s professional response.

Mr Kua mentioned that in the constitution of clan associations, the flexibility of amendment for the council members should increase to reduce hassle. He also pointed out that under the Societies Act and the Societies Ordinance, the Registry of Societies currently has 16 Statutory Return Forms. iROSES, an online submission system, was implemented from 17th May 2010.

Over the three-day course, he shared and analysed the responsibilities of leaders, administrative rules as well as financial management and meeting guidelines. Participants found the course beneficial and gained a deeper understanding of the administration of clan associations.