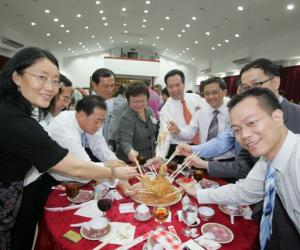 Ms Ellen Lee and Secretary-General Mr Lin Fanghua, together with the members of the SFCCA Council and leaders of the new immigrant association, came together for Lo Hei to celebrate the Spring Festival

In order to strengthen the links and promote exchanges among member associations, the Singapore Amongst the guest list were member associations and new immigrant organisations (including Tianfu Association, Tianjin Association, Hua Yuan Association, Kowloon Club, as well as Singapore Chinese Scholars and Students Association) to attend the celebration of the Spring Festival in a relaxed and happy atmosphere. The guest of honour was Ms Ellen Lee, MP for Sembawang GRC (Woodlands). The event gathered more than 400 leaders representing over 130 associations.

This is the first time SFCCA has hosted a member’s night, and it is the first celebration of the 25th anniversary of SFCCA. The theme of this session is “Harmony”, signifying SFCCA’s hope to unify the Chinese community with hopes that everything will be smooth-sailing and that everyone will get along well and stay united.

That evening, the event hall in SFCCA was full of joy and happy laughter, with the guests finding time out of their busy schedules to meet up and catch up with their fellow mates from other associations. At about 7:15pm, everyone started streaming into the hall and began watching a video montage of SFCCA’s activities since 2009.

SFCCA Secretary-General Mr Lin Fanghua pointed out in his speech that the theme of “Harmony” was a creative decision by the working committee. If everyone has the spirit of being harmonious, then it will make a place a better and more beautiful place to live in. Hence, he hoped that local and new immigrant associations could work hand in hand and without any prejudice, to allow for a more harmonious integration for new immigrants.

Seeing that many clan associations have cooperated with the government and made tremendous achievements in helping new immigrants to better integrate into the society, Mr Lin Fanghua said that it can be foreseen that this will be an important part of the associations’ activities in the future. He believed that under the leadership of the leaders, SFCCA will make new efforts and contributions for the stability and prosperity of society and the country, and achieve greater results than before.

In her speech, Ms Ellen Lee, the guest of honour, praised SFCCA for its contribution to the promotion of traditional Chinese values and the promotion of social harmony in the past 20 years. At the same time, various clan associations have also become active with the assistance and leadership of SFCCA, participating in the many cultural activities in response to the needs of society, and made great efforts for racial harmony and assisting new immigrants to integrate into our society.

She also called on clan associations to adapt to the needs of the times, make appropriate adjustments, explore their own strengths, so that they can make contributions to the society. 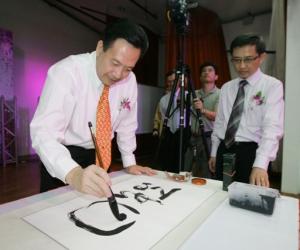 Secretary-General Lin Fanghua officiated the event by writing in Chinese calligraphy the theme. This was put up for bidding, and Mr Tan Aik Hock from Lam Ann Association successfully bid the calligraphy for $10,000. The philanthropic Mr Tan donated the item and put it up for bidding again, and it went into the hands of Mr Tan Yarong of Lam Ann Association for $3,000.

Other than the scrumptious gourmet, clan associations and new immigrant associations also put up performances to entertain the guests. At the same time, the leaders from new immigrant associations took the opportunity to go up to the stage to introduce their associations and background. Mr Chen Guo Tai of Kowloon Club received resounding applause from the crowd when he greeted the guests in Hokkien. He mentioned that Hongkongers are typically unable to converse well in Mandarin, but in order for him to better communicate with locals and leaders of clan associations, he led by example – learning Mandarin and Hokkien on his own accord. 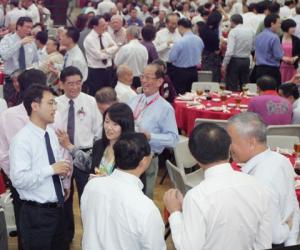 Guests took the opportunity to network

The atmosphere that evening remained high, with entertaining performances and donations worthed $10,000 raised. Mr Lin Fanghua even sang in front of everyone for the first time. His rendition of “Under The Banyan Tree” won the applause of the guests.

Other than guests getting to interact with one another and further strengthening friendships, recognition awards were presented to performing groups and the sponsor. To add on to the festive cheer, a lucky draw was held.

Tianfu Association’s President Mr Tony Du Zhi Qiang expressed during an interview that this is a very successful event. Not only was it large scale, many new and old immigrants were invited and had the opportunity to network with one another. The immigrants also put up performances for the evening. He highlighted that through this events, he has gotten to know leaders of other associations and understood better their operations. He found the interaction beneficial, and a good learning experience which will help him run his association better. He hoped to be able to attend such events in the near future.

Liu Kwee Tang and Ang Association President Mr Ang Jia Yu had nothing but praises for this event organised by SFCCA. He said that it would be not easy for clan leaders to meet due to busy schedules, so such event provided them with the opportunity to catch up with one another.

The SFCCA Members’ Night ended on a high note that evening, at 10:15pm.