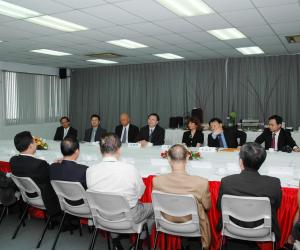 A group of 6 from the China Overseas Exchange Association, led by Ma Rupei, the Vice-President of the association, visited SFCCA at 3pm on May 29 for an exchange. Secretary-General Lin Fanghua, together with 15 of the SFCCA Council Members, Honorary Members and representatives of various groups, welcomed their presence.

Before the exchange, Secretary-General Lin Fanghua led them to visit the Historical Library of the Federation.

At the exchange meeting, Lin Fanghua introduced the representatives of the Federation, such as Treasurer Ho Kwok Choi, and Council Members Ho Kiau Seng, Liang Qingjing, etc. He said that under the leadership of President Wee Cho Yaw, SFCCA has been advancing with the times in the past 20 years, promoting the development of Chinese language and culture, and contributing to the Singapore Chinese Society and even Singapore-China Friendship.

Thereafter, a 15-minute video celebrating the 20th anniversary of SFCCA was screened, to introduce to the group more about SFCCA’s history, contributions and future plans. Ma Rupei, said that the video gave them a deeper, more comprehensive understanding of SFCCA.

At the same time, the site also showed the fundraising donations made by the Federation last year for the snow disaster in China and the Sichuan earthquake, as well as voluntary work done during the Beijing Olympics, showing that the Federation has always had a strong friendship with China.

Ma Rupei said at the exchange meeting that the China Overseas Exchange Association is an overseas exchange organisation of the Chinese government, and that they are keen to touch base with the ancestral organisations of various countries. This trip saw them visiting three countries, namely Indonesia, Singapore and Brunei. Singapore was the second stop. He believes that in over the past 20 years, SFCCA has had various contributions, benefitting the society while playing an integral role in uniting the people, as well as promoting Chinese culture and values. He also sincerely thanked the Chinese Association for its support during the snow disaster, earthquake and the Olympic Games. He expressed the hope that in the future, both SFCCA and his association could strengthen ties and work on possible collaborations.

Mr Lin Fanghua revealed that the Federation has always maintained close contact and communication with local new immigrant organisations such as Tianfu Association and Huayuan Association. Currently, it is working hard to promote the integration of new immigrants into the local society. 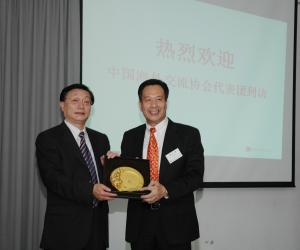 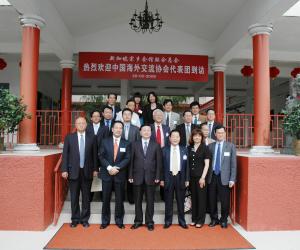