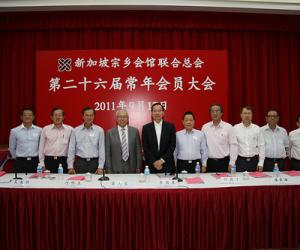 On 17th September 2011, SFCCA held its 26th Annual General Meeting at the SFCCA Multi-Purpose Hall. More than 200 representatives from more than 100 member associations were present for the meeting.

One of the important agenda for the meeting was to pass the motion to amend SFCCA’s constitution. SFCCA President, Mr Chua Thian Poh, said that this amendment is tabled to adapt to the changing societal trends and to define SFCCA’s Mission and Vision.

There are three main points in the amendment to SFCCA’s constitution:
1. Changing its vision. On top of promoting chinese culture and values, SFCCA will also shoulder responsibilities in achieving societal harmony and cultural integration.
2. The introduction of Associate Membership to SFCCA in order to unite Chinese organisations and contribute to Singapore’s culture and society.
3. SFCCA will increase the number of council members from 15 to a maximum of 31 in order to attract more talents for SFCCA’s development. 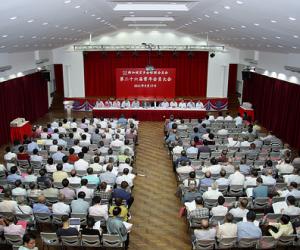 During the meeting, members raised questions on various issues, including: Property tax, language and culture classes and the poor level of chinese in Singapore. Participants expressed their wishes for SFCCA to organise secretariat classes to improve the standard of the clan associations’ secretariats. Council Secretary-General, Mr Patrick Lee replied that SFCCA is in the midst of discussion with Information Development Agency (IDA) to set up computer lessons to assist clan associations in digitalisation and setting up websites. After renovation works at SFCCA’s main building is completed, 3 classrooms will be designated for computer lessons. SFCCA hopes that member associations will actively join these lessons when they begin.