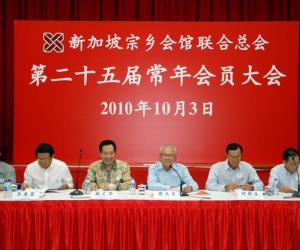 On 3rd October 2010, SFCCA helds its 25th Annual General Meeting  (AGM) at the SFCCA building’s hall. More than 100 member associations and 250 representatives were present for the meeting. Before the meeting started, a minute of silence was observed for the passing of Mdm Kwa Geok Choo, wife of Mr Lee Kuan Yew.

SFCCA’s 2nd President, Mr Chua Thian Poh, hosted the AGM for the very first time. He expressed his gratitude to his predecessor, Mr Wee Cho Yaw, for giving him to opportunity to serve the members and the Chinese society. He said that in the past year, SFCCA focused on strengthening its ties with member associations by organising events to increase interaction between SFCCA and its members. Recently, SFCCA has also organised a series of lunch meetings between Clan Leaders and Council members as a informal and way to understand the member associations’ concerns and needs.

“Every suggestion and feedback provided by the Clan Leaders during the lunch meetings are treated with importance. After every lunch meeting, we will consolidate the member associations’ feedbacks. This helps SFCCA to continuously improve its service standards and also connects SFCCA to its members. This form of engagement will be an important reference for SFCCA when it decides on future plans.”

SFCCA also invites new migrant organisations to participate in its events to help them integrate into Singapore’s society. Mr Chua also called for the Clan associations to take the lead in encouraging their members to participate in community events and learn more about the development in foreign affairs to play a part in defending Singapore’s peace and prosperity.

Apart from this, Mr Chua pointed out that it has been 25 years since SFCCA’s establishment. SFCCA’s constitution has to change to adapt to societal changes while meeting the needs of its self-development. Thus, there will be a review on SFCCA’s constitution to make necessary amendments.

During the AGM, member associations expressed their views on topics such as relaxing the limited space for dialect, conflict resolution and constitution amendment as well as promoting Chinese language and culture preservation. Mr Chua replied that these feedback will be submitted to the relevant authorities. SFCCA’s long-term development hinges on support of member associations. He expressed his wishes for member associations to actively participate in SFCCA events to contribute to Singapore’ development.