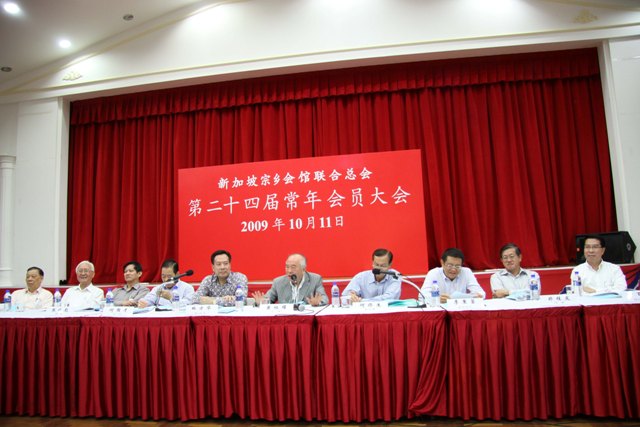 “Singapore is a multiracial society. Racial harmony is the fundamental interests behind Singapore’s development. Building and maintaining racial harmony is the duty of every organisation and person. It is a continuous long-term project.” – SFFCA President Mr Wee Cho Yaw (5th from right) in a speech at the 24th Annual General Meeting

The 24th Annual General Meeting (AGM) was held on 11th October 2009 at the SFCCA Multi-Purpose Hall. More than 150 representatives from 75 member associations were present.

The AGM started at 11:30am. Speaking to the crowd, SFCCA President Mr Wee Cho Yaw pointed out that according to latest statistics, Singapore’s population is nearing 5 million, an increase of 1 million compared to 9 years ago. A majority of the increase is due to new immigrants. The government has also announced a series of measures, setting up a $10-million “Community Integration Fund” to help new immigrants integrate into the society. SFCCA and its member associations have the responsibility of creating a welcoming environment for these new immigrants such that everyone can live in harmony. He also emphasised that SFCCA should organise more events to connect the different races together to create a harmonious society.

The AGM verified the minutes from the 23rd AGM. In response to the suggestion of changing the current procedures for council election raised in the previous AGM, Secretary General Mr Lim Fang Hua said that the Council had discussed and decided not to change the current procedures. During nomination, one member association has to nominate the nominee and two other member associations must second the nomination.