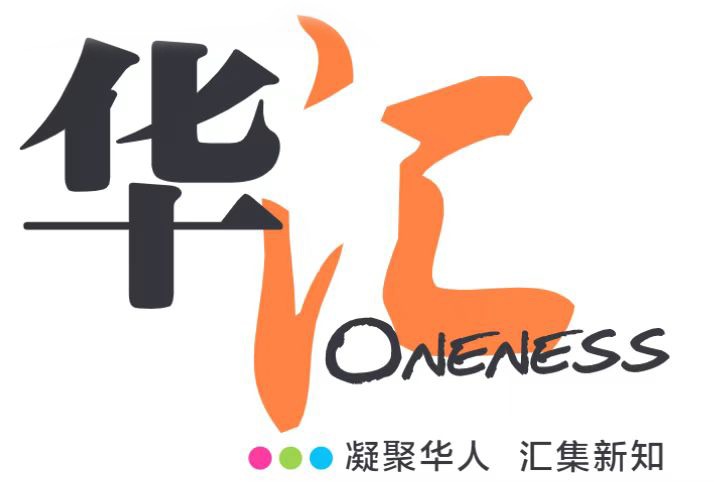 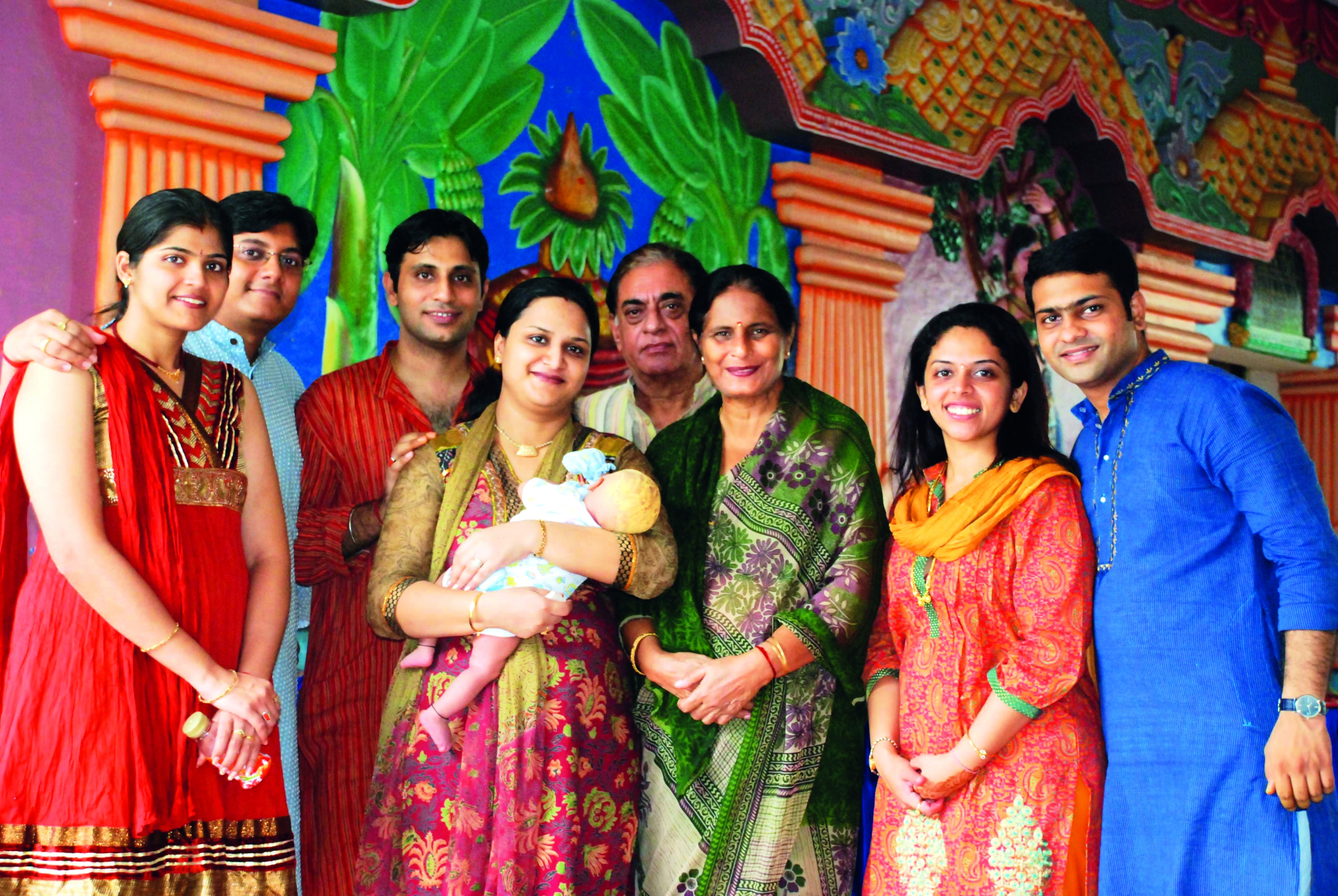 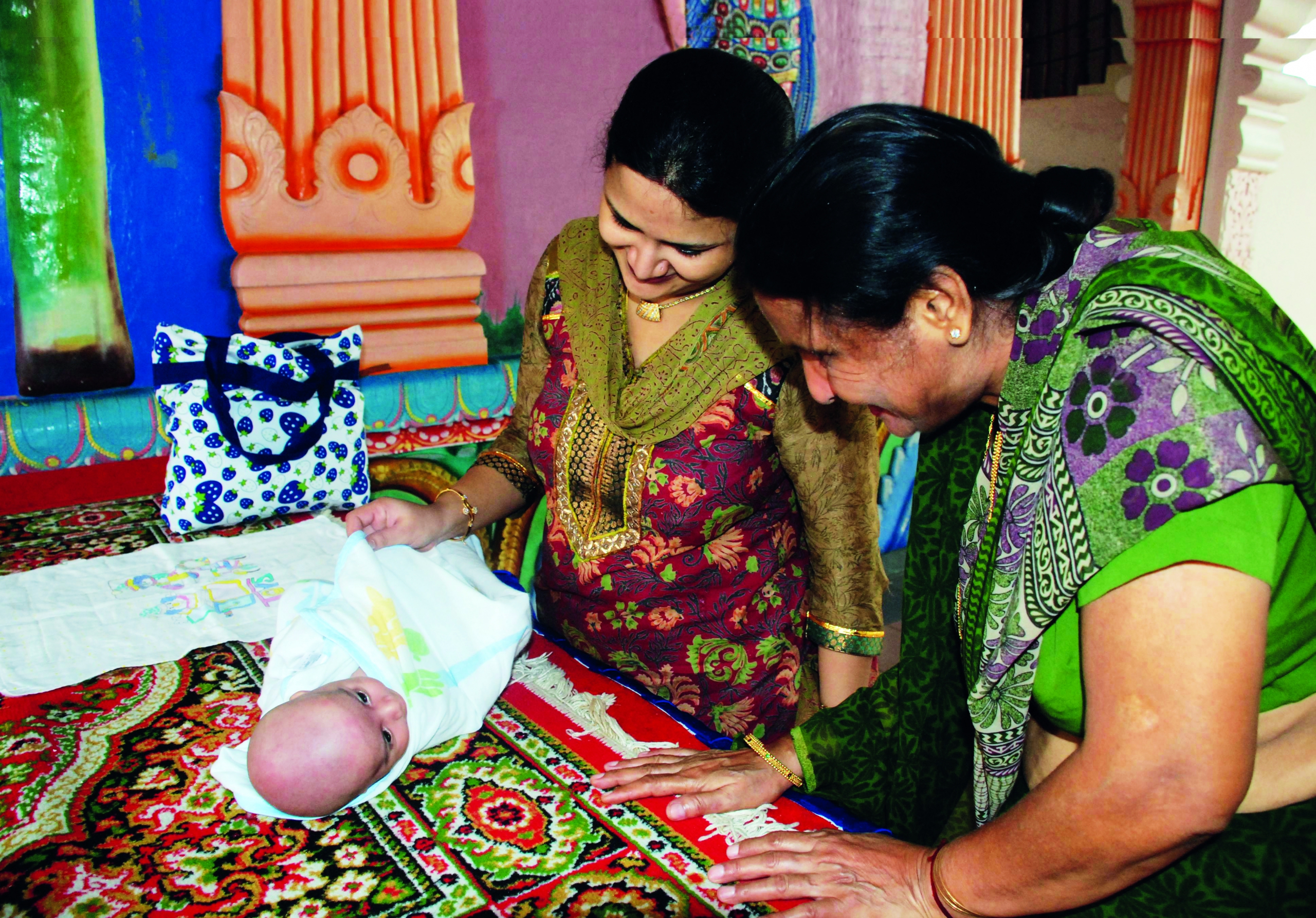 In India, people attach great importance to each stage before, during and after childbirth. In some places in South India, there is a ceremony called Garbadhana when a wedding is held. In the ceremony, a little boy blesses the newlyweds for the birth of a male child from their union. During pregnancy and childbirth, the pregnant woman depends on the elders of her family including her grandmothers, aunts, mother and mother-in-law. They have rich experience in childbirth and also knowledge of the rituals and taboos. In addition to helping the mother-to-be understand childbirth customs, they also undertake some of the housework and care of the newborn, so that pregnant women and new mothers can get adequate rest and avoid health issues like postpartum depression. 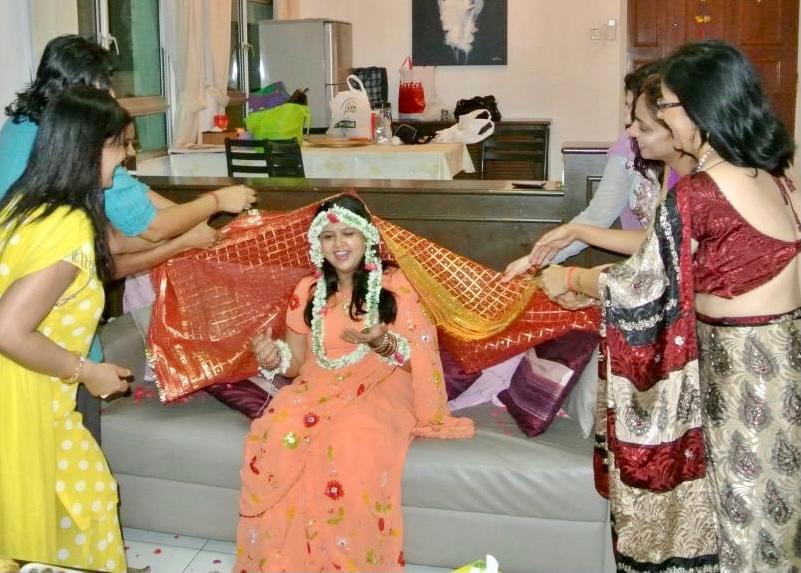 What is the meaning of clanging bracelets?

In some areas of India, a pregnant woman’s natal family will hold a ceremony called Seemantam/shaadh/godh bharai in her seventh month of pregnancy. The pregnant woman will be dressed as a bride in ornate clothes and jewelry, she will be offered her favourite foods to eat and she will also be made to wear red and green glass bracelets by the women who attend the ceremony. The sound of these bracelets is thought to be able to reach the uterus and comfort the foetus. The bracelets are traditionally not taken off until the birth when they are handed over to the midwife.

In the age when medical treatment was still underdeveloped, there was always a certain risk of death at childbirth. Therefore, this ritual is held during the critical period of the seventh or eighth month of pregnancy to allow the pregnant woman to satisfy her last wish, such as her craving for certain foods. From this time on, some pregnant women will stay in their natal homes to rest as much as possible, and wait until 40 days after giving birth before returning to their husband’s home.

Why do we need to clean up our diet?

In Ayurveda, a 5000-year-old Indian therapeutic tradition, this period is considered to be a sensitive period for the parturient, especially for her digestive system. That is why simple and easy-to-digest foods are recommended for this time. Traditionally, new mothers also consume very simple but special foods and a variety of herbal beverages to promote healing, strengthening her immunity and improving the supply of breast milk. This includes eating all kinds of beans, pumpkins, carrots, beets, green leafy vegetables and zucchini and other vegetables to nourish the body and promote healthy bowel movement.

New mothers are expected to avoid vegetables that produce gas such as potatoes, cabbage and other cruciferous vegetables like broccoli and also avoid leftovers. New mothers are also encouraged to eat more fresh food, and eat regularly, not too much or too little, so as not to overburden the digestive system. 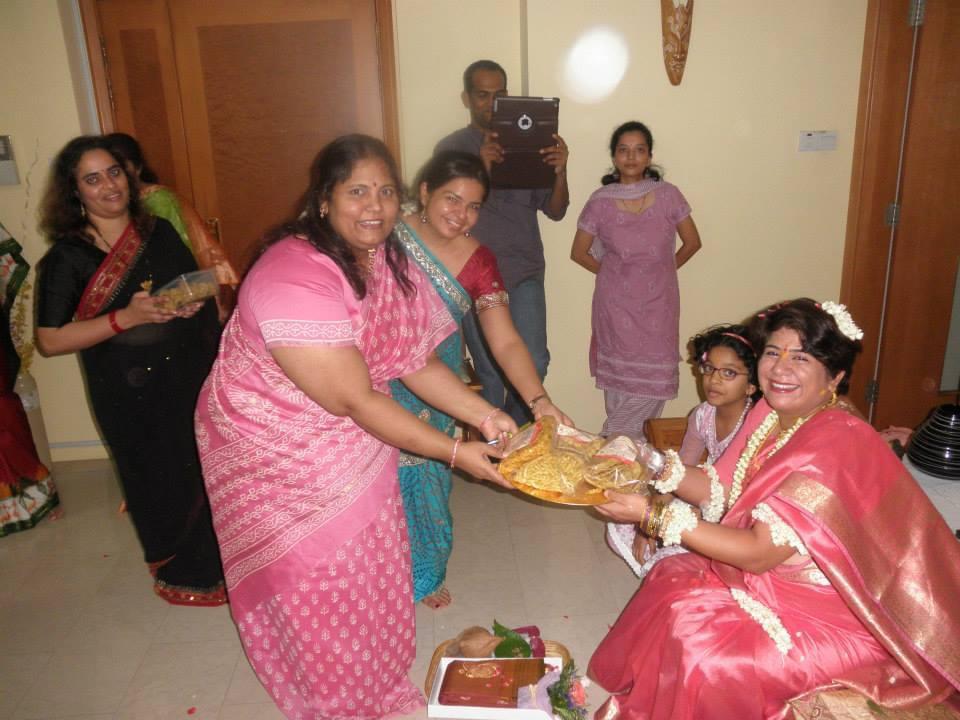 Family members or other experienced women will also give the new mother a hot oil massage every day. The massage uses nourishing oils such as sesame oil, coconut oil, and olive oil. These massage oils have different characteristics. For example: sesame oil is believed to relieve stress and balance blood pressure; coconut oil smells very comfortable and will be quickly absorbed by the skin; olive oil is good for skin and hair. The massage is usually followed by a warm water bath.

Belly wrapping is a routine practice in Indian culture. An old cotton saree is usually used to wrap the new mother’s abdomen. It is believed that this can gently push back the stomach muscles, reposition the uterus, and reduce stretch marks.

Young pregnant women in Singapore may return to their natal homes or let their mothers come over and take care of them in their own homes. The special ceremony at the seventh month of pregnancy is often performed by women of both families. The obvious difference from the past is the role of the new father during and after pregnancy. In the past, the new father and the other men in the family did not have to participate at all.

In Singapore, local Indians and expat women still have the habit of taking their children to the temple for all the rituals of the first year like naming ceremony, and shaving their head etc. according to their family beliefs. With the changes in lifestyles, some customs have also become simpler. The confinement period may not be a full 40 days, and the gifts received by new mothers and babies are much simpler than before. It used to be gold and silver bracelets, earrings, etc., now it is brand-name clothing or toys.

BABY’S FIRST YEAR: WHAT ARE THE CUSTOMS? 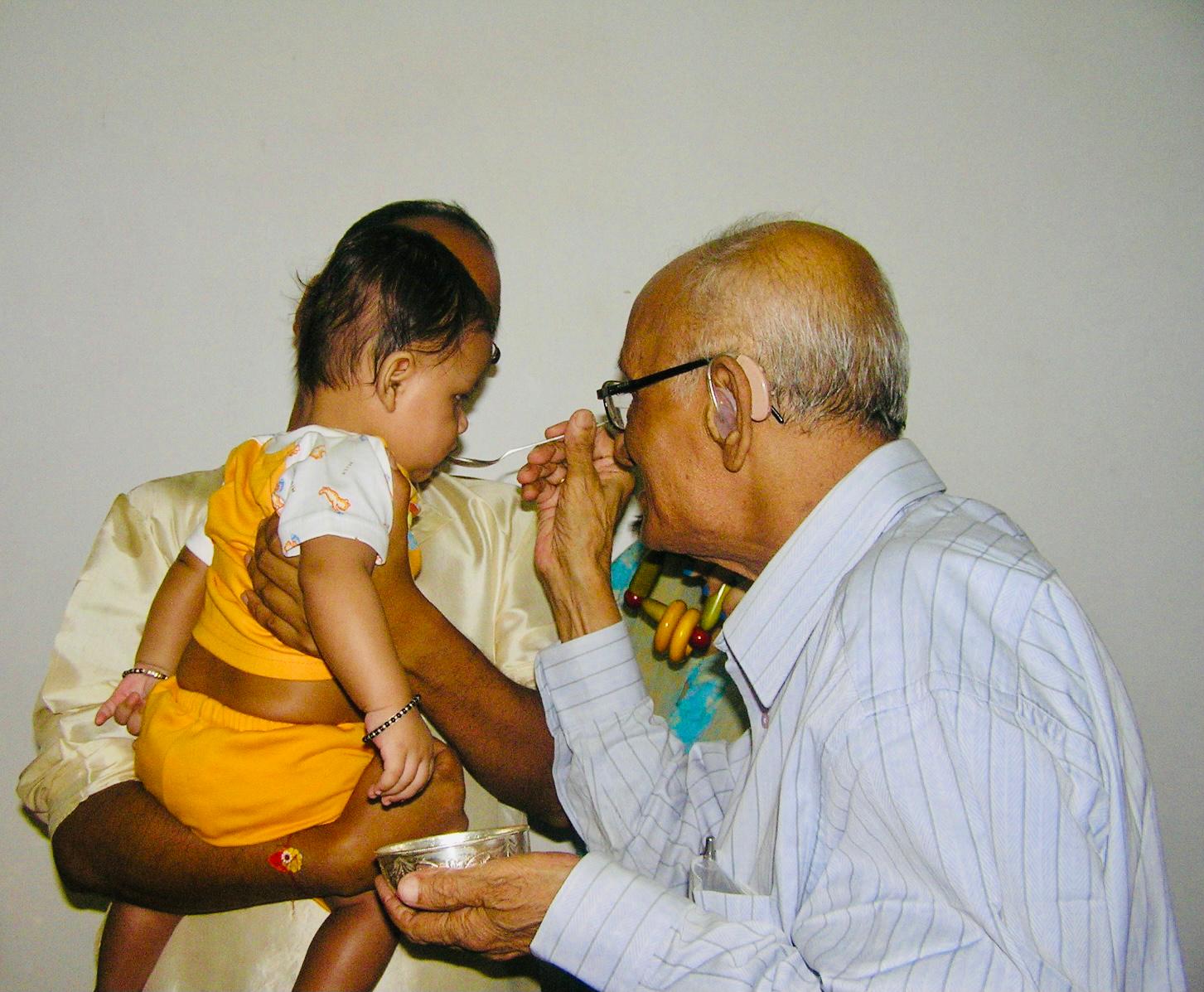 1.Many Hindu and Muslim communities follow rituals for babies to taste sweets right after they are born. Then there is a ceremony after six months called annaprashan, where the baby is fed cereals for the first time. This ceremony is quite elaborate in some parts of India. 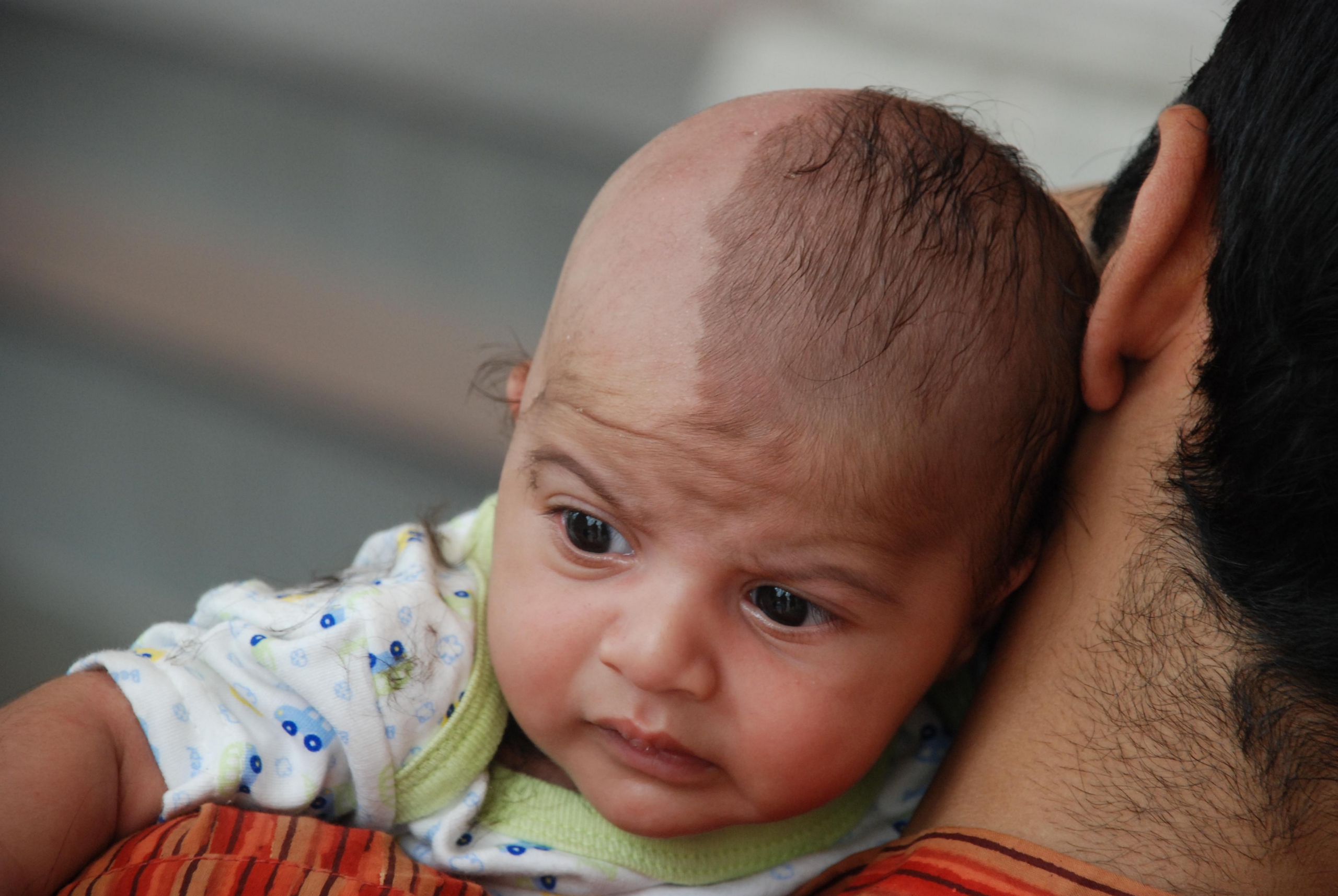 2.It is believed that performing a Mundan or head shaving ceremony for a baby can eliminate the negative emotions of the baby’s previous life and purify its body and soul. This ceremony is usually held when the child is one to three years old.

3.In the ceremony called Karnavedha by Hindus, baby boys and girls have their ears pierced. It is said that doing so can ward off evil spirits! Earrings are believed to help maintain the flow of electricity in the human body. Some Indian communities believe that the ear is an important acupuncture point, so piercing will help the child’s health and development.

4. The rituals for naming babies vary in different parts of India. For example, the Sikhs will bring the baby to the Sikh temple, and the religious teacher will open the holy book called Guru Granth Sahib and read out a verse from it at random. Parents may take the first letter of the verse to name their children. They then announce the baby’s name to the congregation.